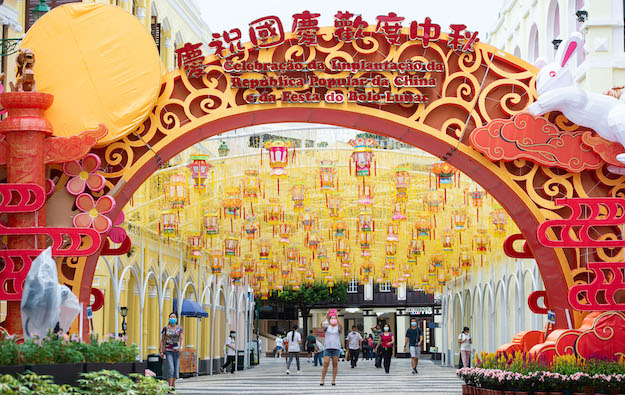 Visitor arrivals to Macau during the first three days of the autumn Golden Week holiday period were down by 87.2 percent from the same period in 2019.

The aggregate number of mainland visitor arrivals in the first three days of this year’s autumn Golden Week stood at less than 55,100, a year-on-year decrease of 86.1 percent.

According to the available data, Macau welcomed around 15,500 visitors on the first day of the holiday period, down 88.5 percent in year-on-year terms. The visitor arrival tally increased to 22,116 on the second day of the autumn Golden Week, still a decline of 86.1 percent compared to the same period in 2019.

On Saturday, Macau logged 20,726 visitor arrivals, down 87.2 percent from the prior-year period.

Last year, approximately 985,000 people visited Macau during the whole of autumn Golden Week, which ran from October 1 to 7. The tally – more than 81 percent of which involved visits by mainland Chinese – represented a year-on-year increase of 11.5 percent.

Autumn Golden Week is usually a peak season for Macau’s tourism and gaming industries as hundreds of thousands of mainland Chinese tourists take advantage of the weeklong break to visit Macau.

The 2020 autumn Golden Week has been seen by a number of investment analysts as a key moment for gauging the likely strength of any comeback this year in casino gross gaming revenue for the Macau market, after the initial disruption wrought by Covid-19.

Since September 23, applications have been reopened across mainland China for tourism permits for trips to Macau, although analysts have suggested that for now, it is typically taking seven working days to process them. There is little prospect of Hong Kong visitors arriving in any numbers during Golden Week, as a 14-day quarantine is still required for anyone arriving via the neighbouring city.

It is likely that Macau will shortly have a third round of citywide centre-based Covid-19 testing in little more than a week, after the results so far of a second mass test – that was due to finish... END_OF_DOCUMENT_TOKEN_TO_BE_REPLACED