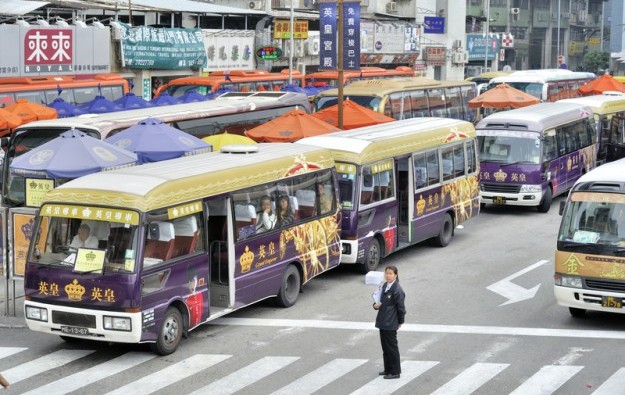 The Macau government is negotiating with gaming operators for them to provide transportation for their labour force, including migrant workers and workers on the casinos’ construction sites.

Chiang Ngoc Vai, deputy director of the Transport Bureau, said his bureau has received a positive response from casino operators regarding the transportation of workers. Mr Chiang was attending a TDM Radio talk show on Thursday.

The plan includes shuttling hundreds of workers deployed for the construction of the new casino projects in Cotai. These workers are usually employed by the construction companies, not by the gaming operators.

“I think it [the transportation system] can be launched soon and we are talking with them [casino operators] about the pick up and drop off locations and what routes they are planning to take,” Mr Chiang was quoted as saying.

The bureau says the aim is to help ease the traffic congestion in the city.

“The details are still being negotiated, but are not specifically aimed at one group [of workers],” a spokeswoman from the Transport Bureau told GGRAsia. “We haven’t yet set a date for it to be launched,” she added.

Currently, some casino operators already provide transportation to their labour force, with pick up points scattered around town. They also shuttle visitors and tourists from the city centre and border crossings to their respective properties.

The idea of casino operators providing transportation and accommodation to migrant workers – know locally as ‘non-resident workers’ or ‘blue card holders’ – was included in the political manifesto of Macau’s Chief Executive, Fernando Chui Sai On. Mr Chui stood unopposed and was elected for a second consecutive term on August 31.

The plan could mean that the operators will have to make special arrangements to accommodate the government’s request. That may entail “an increase in operating costs” for gaming operators, said Carlos Siu Lam, associate professor at the Gaming Teaching and Research Centre at Macao Polytechnic Institute.

“With the new election of the Chief Executive, there is a great political need for Macau government to give higher priority to the welfare of the Macau community, including the transportation issue, relative to Macau’s economic development,” Mr Siu told GGRAsia.

“With the increasing complaints raised by local people on the difficulty in getting on buses as a result of imported foreign workers, it’s natural for the Macau government to invite gaming operators to help solve this issue,” he said.

Paradise Co Ltd, an operator of foreigner-only casinos in South Korea, reported casino revenue of nearly KRW48.65 billion (US$39.8 million) for January 2023, according to a Thursday filing to the... END_OF_DOCUMENT_TOKEN_TO_BE_REPLACED