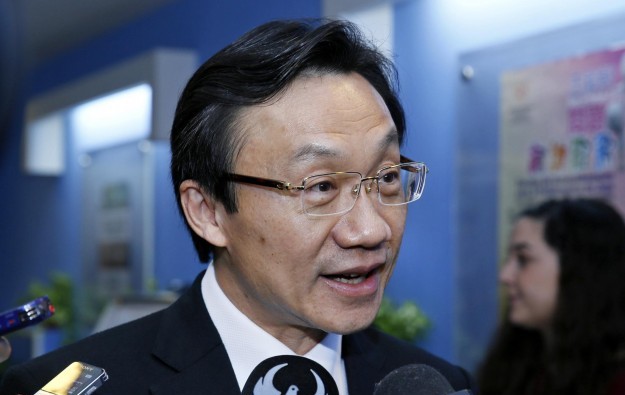 The Macau government is mulling a U-turn regarding a bill that proposed a full smoking ban inside the city’s casinos. Officials are now assessing a proposal to keep smoking lounges – provided they are free of any gaming tables or machines – on gaming floors.

The announcement was made on Thursday by the Secretary for Social Affairs and Culture, Alexis Tam Chon Weng (pictured in a file photo), during a plenary meeting of the Macau Legislative Assembly.

Mr Tam said the government was assessing a proposed amendment to the bill, put forward by a working committee of the city’s Legislative Assembly that has been tasked with scrutinising the draft law. The amendment proposed “stricter standards” for smoking lounges, Mr Tam explained, as quoted by local media.

He said the proposed standards were of “high quality”, using “high-tech measures to prevent smoke from going out of the smoking lounges” and were designed to ensure that smoke would not be inhaled by casino workers and non-smoking casino patrons sitting nearby.

According to Mr Tam, the city’s six licensed casino operators had previously suggested to the government a similar amendment – including the use of double-door airlock systems in smoking lounges – in exchange of the government dropping the proposed full smoking ban inside casinos.

Mr Tam did not provide much detail on the proposed amendment. It is unclear if existing casinos would be allowed to set up further smoking lounges on their mass floors. The government had previously said it had not been authorising smoking lounges additional to those already in place.

It is unclear how the proposed amendment to the bill revising current smoking legislation would affect VIP casino rooms.

Mr Tam stressed that the government needed to “hear the casino workers” regarding the amendment proposal, in order “to understand whether we can have their agreement”. Worker support to maintaining smoking lounges would be needed for the government to back the amendment, he stated.

The Secretary said that the main goal of the government was to pass the bill to revise the current smoking legislation, before the end of the current legislative term in August 2017. If that deadline is missed, the proposed legislation would fall, and the process – which began in July 2015 – would have to start afresh.

The bill additionally includes provisions to increase the tax rate on retail sales of tobacco and the fines that can be levied on those that break the revised rules. Under the new bill, anyone lighting a cigarette in prohibited areas will be subject to a fine of MOP1,500 (US$188), up from MOP400 under the current legislation.

A number of investment analysts have stated that in markets where casino smoking has been banned completely, casino revenue subsequently dipped.

A committee of the Thai National Assembly looking at the issue of casino resorts for that nation has suggested it could be viable to have five, spread across the country, as localised drivers of... END_OF_DOCUMENT_TOKEN_TO_BE_REPLACED