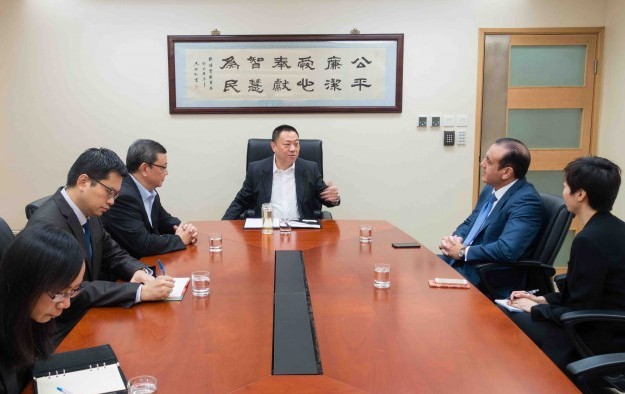 Macau’s Secretary for Economy and Finance, Lionel Leong Vai Tac, has responded to criticism by Steve Wynn, the chairman and chief executive of Wynn Resorts Ltd, concerning the government’s policy of capping the number of casino tables allowed in the local market.

Mr Leong stated during the encounter that the Macau government “firmly” stands by the table cap, according to an official release. The policy aims to limit the increase of live dealer table numbers to 3 percent compound annual expansion until the end of 2022, from a base of 5,485 tables recorded at the end of the fourth quarter in 2012.

“Those policies cannot be changed on a whim,” Mr Leong said, according to an unofficial translation to English of the original government press release.

The release reiterated that the government would look into the non-gaming components of the latest generation of casino resorts being developed on Cotai by Macau’s six gaming concessionaires, and how each company forms partnerships with local small- and medium-sized enterprises, among other factors, before deciding on table allocation for each new property.

Although the Portuguese version of the government release did not mention Wynn Macau by name, it included a photograph (above) of the meeting between Mr Leong and the Wynn Macau representatives.

“The table cap is the single most counterintuitive and irrational decision that was ever made,” Mr Wynn said on a conference call with investment analysts after Wynn Resorts reported its third-quarter results. He added it was “preposterous” that casino operators in the Macau market would only know how many new-to-market tables they would be allocated by the government a few weeks before opening new properties.

The government’s Sunday press release pointed out that gaming table allocation is one of the responsibilities of the local administration. It added that the city’s authorities have kept “a good communication” with the local casino concessionaires. Operators, in turn, have shown “respect” regarding the policies for the sector, ensuring their correct implementation, the note added.

Stocks of Macau casino operators rose substantially in the Hong Kong market on Monday, after the local government announced on Friday a bill proposing a new regulatory system for gaming... END_OF_DOCUMENT_TOKEN_TO_BE_REPLACED