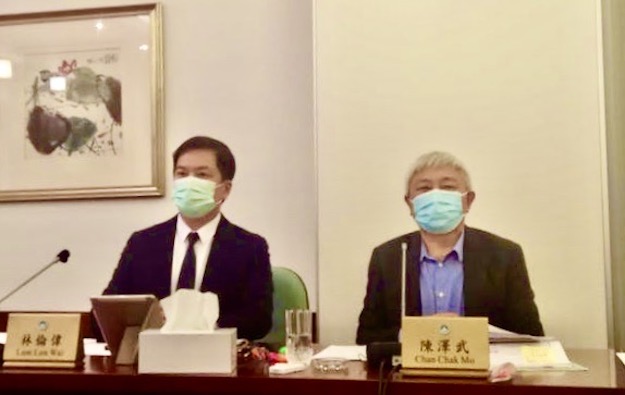 A clause in Macau’s gaming law amendment bill concerning what would constitute endangerment to national security was one of the main topics discussed on Friday at a meeting of the Legislative Assembly committee that is tasked with examining the document. Some members of the committee had requested the government to clarify that provision and how it could be applied in the future.

The bill states that the Macau Chief Executive has the right to terminate a concessionaire’s contract for reasons including threats to the national or the city’s security, public interest, or breaching of its contractual obligation.

The chief executive’s decision would have to be analysed by the Macao Gaming Committee before being enforced, according to the draft law. Should such a scenario arise, the gaming concessionaire affected would also have the right to appeal the decision.

Speaking to reporters after Friday’s meeting, legislator Chan Chak Mo (pictured right) said that a decision by the Macau government to terminate a concessionaire’s contract for threats to national security would involve an administrative process, rather than a criminal one. Mr Chan heads the committee that is scrutinising the government’s gaming bill.

He cited the government officials as saying that threats to national security in this particular case would not be covered by criminal law, such as the Law on Safeguarding National Security, as procedures related to criminal cases could take “up to 10 years” to be settled, which could be “the very duration of a concession’s term” under the new gaming regulation.

What constitutes a threat to national or Macau’s security was “not based on a definitive concept”, and it would also be subject to information collected by the government against certain entities, Mr Chan said, citing the government representative. “This could be, for example, an act of foreign collusion, or funding for anti-China purposes,” he added.

The committee’s head also revealed that the local units of respectively Wynn Macau Ltd, Galaxy Entertainment Group Ltd and Sands China Ltd had submitted opinions and questions to legislators regarding the contents of the bill. The Legislative Assembly is expected to give a final reading to the gaming law amendment bill by June this year.