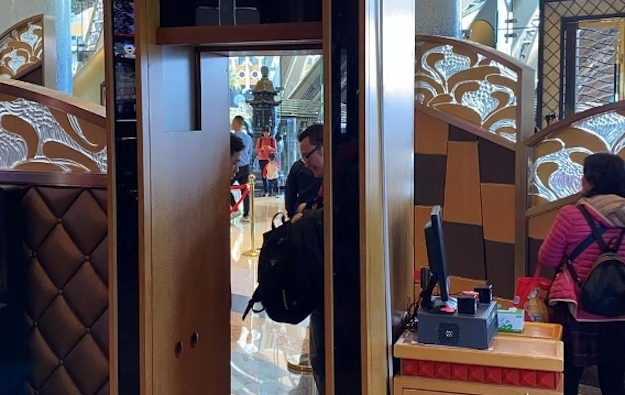 Macau’s casino regulator said on Monday that it had been – jointly with the city’s Health Bureau – assisting local gaming operators to “speed up” the purchasing and installation of overhead temperature-screening equipment (example pictured) at their properties.

The news was given in a statement issued by the Gaming Inspection and Coordination Bureau, a body also known as DICJ. The update came following a “serious”-level alert issued on Sunday by the local authorities to the risk posed by reported cases of “viral pneumonia of unknown origin” linked to Wuhan city in mainland China.

Macau’s six casino operators have so far mostly been screening via hand-held devices the body heat of staff and customers entering their properties. Macau is a major destination for tourists from mainland China, and the city has regular direct air services linking it to Wuhan in Hubei province.

The gaming bureau noted in its Monday circular that casino operators had “increased their orders for temperature-screening equipment”, and were “preparing” to install it “at the entrances and exits of the casinos”.

The casino regulator pledged it would ensure adoption by the industry of “effective measures” to mitigate any impact to visitors and staff at the city’s casinos from infectious disease, and keep in “close contact” with the gaming operators in order jointly to enforce preventive measures in what it termed a timely manner.

A Monday press release from the government’s information service said Macau had strengthened inspection and quarantine measures at border checkpoints in the city – including Macau International Airport.

The local authorities have set up an interdepartmental task force to tackle the viral pneumonia cases of unknown origin that reportedly emerged from Wuhan.

The Monday statement from the gaming bureau noted that since January 1, local medical facilities had reported an aggregate of eight people – who had been in Wuhan within the previous 14 days – presenting themselves for treatment in Macau with respiratory problems and fever. Seven of these eight cases were eventually diagnosed as either influenza or a common cold. In one case a patient had been placed in isolation in hospital for observation.

So far, no case of illness in Macau had been scientifically linked to the Wuhan outbreak, the task force said in its Monday night statement.

Wuhan outbreak patients exhibited fever, with a few have “difficulty in breathing”. Chest X-rays of patients indicated “invasive lesions” of both lungs, the World Health Organization – a United Nations Agency – had said in a Sunday update on its website.

The international body added that day: “Based on the preliminary information from the Chinese investigation team, no evidence of significant human-to-human transmission and no health care worker infections have been reported.”