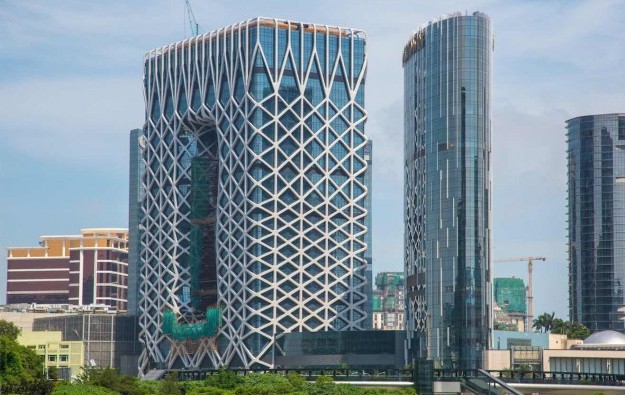 The Macau government has stopped short of issuing a general cessation notice for work on the Morpheus hotel tower construction site following a fatal accident on Sunday, the second death in nine months.

Macau’s Labour Affairs Bureau instead ordered a suspension on “works at height”, but only in the vicinity of the fifth floor of the Morpheus tower where the fatality occurred. Morpheus (pictured left) is a fifth hotel tower at the City of Dreams Macau casino resort, a venue promoted by casino operator Melco Resorts and Entertaiment Ltd.

The labour bureau said in a Monday afternoon statement it had requested a “detailed report” on what it deemed an industrial accident, and noted works at height in the area of the incident could only resume after its approval.

In the statement, the bureau said that it would also pursue a matter of alleged illegal employment in relation to the dead worker. Earlier on Monday a police spokesperson told GGRAsia that – according to investigations so far – the latest Morpheus victim was not registered as a legal worker.

Lawrence Ho Yau Lung, chairman and chief executive of Melco Resorts, was asked on the sidelines of a company event on Monday whether the accident would delay the opening of Morpheus. The company had previously said the facility was likely to launch by the end of the second quarter.

“We are not sure yet,” Mr Ho said. “At present, we are working very closely with our contractor to fully understand the situation. Our hearts go out to the family of the [deceased] worker and the people affected… At this point and time, our number one concern is to work with authorities and the contractor, and also to make sure that the family of the deceased is being taken care of,” the Melco Resorts boss added.

The labour bureau gave in its Monday announcement a brief summary of what happened to the latest Morpheus victim, a mainland Chinese woman aged 32.

“According to preliminary investigation, the [deceased] victim was doing painting work at a suspended ceiling over the fifth floor [of the Morpheus tower]; the suspended ceiling… cracked, causing the victim to fall from about seven metres above ground… and [she] was later certified dead after an emergency rescue,” it stated.

Last year, the Morpheus site had a government-ordered suspension lasting a fortnight, when a 33-year-old worker died after being hit by a steel beam.

China has moved one step closer towards reopening, by relaxing some its Covid-19 control measures, with most infected people now able to quarantine at home rather than in state-sanctioned... END_OF_DOCUMENT_TOKEN_TO_BE_REPLACED