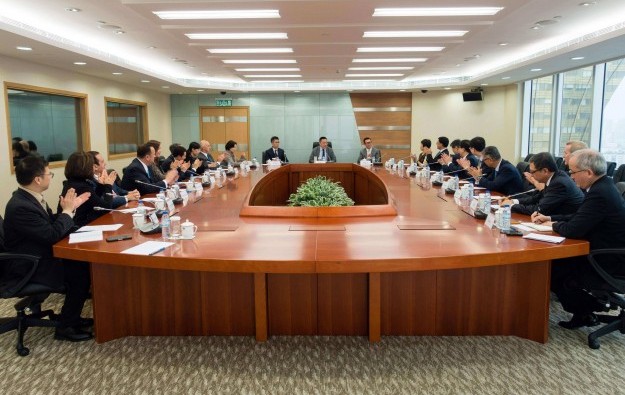 Macau’s Secretary for Economy and Finance, Lionel Leong Vai Tac, has held another formal meeting with the city’s six casino operators, according to a government release issued on Tuesday. The release was accompanied by a photograph of the encounter (shown above).

The new head of Macau’s gaming regulator, Paulo Martins Chan, was also at the meeting. According to the release, it was the first time Mr Chan had met representatives of the six casino operators in an official capacity since he took up his current post.

Mr Chan, a former assistant public prosecutor-general in Macau, was sworn in on December 1 as the new director of the Gaming Inspection and Coordination Bureau, also known as DICJ. He succeeded Manuel Joaquim das Neves, who has retired after almost two decades as director of the bureau.

Tuesday’s release did not go into details on what was discussed at the latest meeting. It stated in general terms that the parties had met for talks on enhancing Macau’s competitiveness.

Mr Leong was quoted as saying that the Macau government would continue to develop gaming regulations in order further to improve Macau’s economic competitiveness. He reportedly added that the Government would work with the sector to overcome challenges relating to what the government refers to as the “ongoing period of adjustment in the gaming market”. The government would also continue to encourage the gaming operators to introduce new non-gaming elements to their properties, the release added.

The document also quoted Mr Chan as saying the city’s gaming regulator would step up efforts to promote what the release referred to as a “healthy development” of the casino industry.

It was the third time this year the government has reported Mr Leong inviting the city’s six gaming operators for a formal meeting, referred to by the government as a “joint meeting”. In April’s reported encounter, he asked the operators to boost their corporate policies in order to promote greater numbers of local workers. In a September meeting, Mr Leong stated operators should “enhance” supervision of VIP promoter activities within their casinos.

Under Mr Leong’s predecessor, Francis Tam Pak Yuen, who was in post from the time of Macau’s handover from Portuguese administration in December 1999 until December 2014, it was not the practice of the government to issue formal press releases regarding any official meetings it held with the six gaming operators.

China has moved one step closer towards reopening, by relaxing some its Covid-19 control measures, with most infected people now able to quarantine at home rather than in state-sanctioned... END_OF_DOCUMENT_TOKEN_TO_BE_REPLACED