Macau govt not expecting spike in visitors from Guangdong 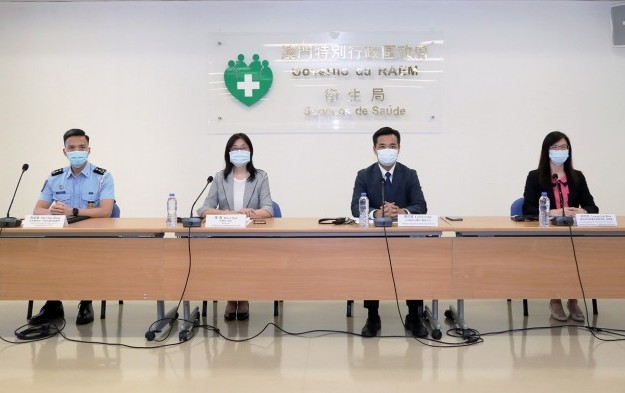 The Macau government is not expecting a big rebound in the number of visitor arrivals following the relaxation of quarantine arrangements between Macau and Guangdong province, said Ines Chan Lou (pictured, second left), head of the city’s Government Information Bureau, during a Tuesday press conference.

The 14-day quarantine rule that applied to the majority of people travelling from Macau to neighbouring Guangdong province in the mainland was removed at 6am today (July 15).

Prior to entering Guangdong, travellers due to set out from Macau will need to complete a nucleic acid test at test institutions recognised by both Guangdong and Macau, to prove they are negative for Covid-19 infection, and to make a declaration of their good health via a so-called health code system recognised by the two sides.

In her Tuesday remarks, Ms Chan said the Macau government has so far not been informed of plans for Guangdong to resume the issuance of visas for their residents to travel to Macau.

There are currently restrictions in the issuance of visas by the Chinese authorities for mainlanders to travel to Macau, including of visas under the Individual Visit Scheme (IVS), allowing mainland residents from selected cities to travel independently to Macau and some other places.

According to Union Gaming Securities LLC, people from Guangdong “comprised about one-third of all visitation to Macau” in 2019. The proportion of their contribution to casino gross gaming revenue (GGR) in Macau last year “was even greater,” suggested the brokerage.

“However, about 75 percent of all visitors from Guangdong to Macau arrived under IVS, which is still suspended,” wrote analyst John DeCree in a Tuesday note. “We continue to view the reopening of the IVS as the main spigot for Macau that still needs to be turned on followed by health cooperation with Hong Kong.”

The mainland and Hong Kong are usually key markets for supplying gamblers for Macau casinos.

Since Monday, all people travelling from Hong Kong to Macau via the Hong Kong-Zhuhai-Macau Bridge must hold a certificate proving they have tested negative for Covid-19 infection. The fresh measure was in view of a new wave of infections in neighbouring Hong Kong, according to the Macau government.

It is likely that Macau will shortly have a third round of citywide centre-based Covid-19 testing in little more than a week, after the results so far of a second mass test – that was due to finish... END_OF_DOCUMENT_TOKEN_TO_BE_REPLACED