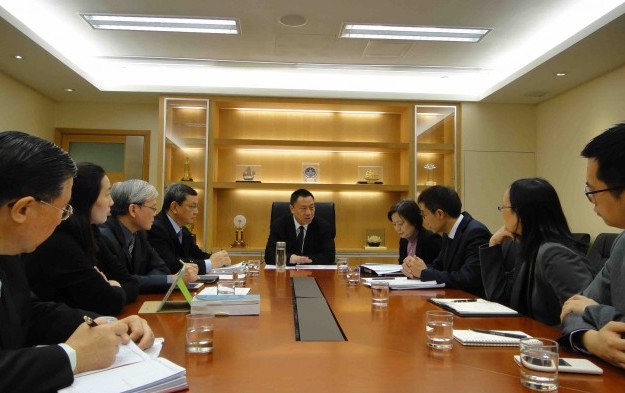 The Macau government announced on Monday the establishment of an interdepartmental task force on the gaming industry. The main goal is to address the issue of potential job layoffs in the sector.

The news followed a meeting (pictured) between Secretary for Economy and Finance Lionel Leong Vai Tac and representatives from the government bureaux under his portfolio.

Mr Leong was quoted as saying that the task force should pay close attention to any negative news involving the city’s six casino firms or any of Macau’s junket operators, following the industry’s seven-month losing streak.

The task force would ensure that any workers affected by layoffs are offered practical support. There would also be help to find new jobs and training opportunities, the press release added.

The government however stressed that up to Monday, it had only received one case of workers being laid off by a junket operator. The press release did not mention the name of the firm.

Macau junket operator David Group confirmed over the weekend that it would close some of its VIP rooms in Macau. David Group’s statement did not specify if it planned to reduce its Macau workforce.

Monday’s press release from the government added that, so far in January, the gaming regulator had received one request from a junket operator to have its licence cancelled. It did not name the firm.

The statement added the government would continue to follow closely the changes in the gaming industry and would, if needed, revise the laws and regulations overseeing junket operations.

Some Macau casinos visited by GGRAsia on Thursday, actually had tables that were closed, notwithstanding strong consumer demand during Chinese New Year (CNY). The reasons for some tables being... END_OF_DOCUMENT_TOKEN_TO_BE_REPLACED