Macau govt to ask casinos to close for 2 weeks: CE 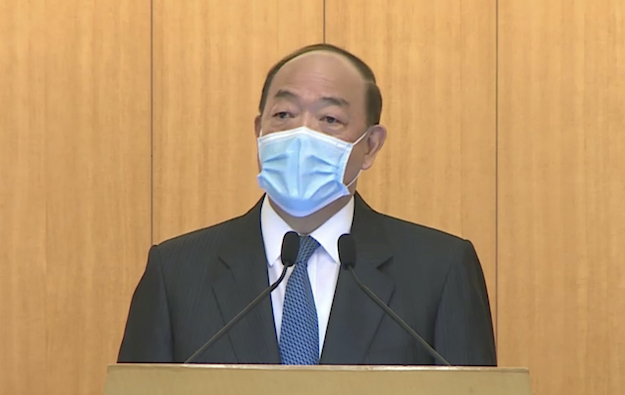 Macau’s Chief Executive, Ho Iat Seng (pictured), says the government will ask casino operators to suspend their operations for two weeks, as the city confirmed on Tuesday two more cases of the newly-identified coronavirus, both involving local residents. Speaking at a press conference at lunchtime, Mr Ho said the government would meet with the city’s gaming operators this afternoon to discuss the matter, including the date for suspension of their gaming operations.

Mr Ho said additionally that the Macau government was aware of the negative impact the decision would have on the companies and on the city’s economy, but said that preventing the spread of the novel coronavirus was now the priority.

The city’s authorities confirmed on Tuesday two more infections, taking to 10 the tally of such cases recorded in the city. One of the infections was said to be the first reported example of local human-to-human transmission of the virus, according to a government statement.

“The ninth [infection] case we have is [a person] employed at an integrated [casino] complex here, who had been in the same space with other gaming workers, or other people in a casino shuttle or within the property’s canteen. This is worrying,” Mr Ho remarked to reporters. He noted that the case involved a 29-year-old woman employed at Galaxy Hotel, part of the Galaxy Macau casino resort complex operated by Galaxy Entertainment Group Ltd in Cotai.

Calling on the casino operators to suspend their business was a “difficult” decision, the Chief Executive said. But he stressed that – considering the current risk relating to the spread of the novel coronavirus – the Macau government would encourage also the reduction of all other commercial activities in the city.

Assuming the situation – regarding the current spread of the novel coronavirus – “stabilises” following the planned half-month suspension of the city’s casinos, they would be allowed to resume their respective businesses, Mr Ho stated.

The Macau Chief Executive also said his administration anticipated a fiscal deficit for this year, and that there would be gaming revenue loss linked to suspension of casino business. “Other industries contribute only a small portion of our taxation income, and we still have relief programmes to support our small businesses,” Mr Ho said. “But we have sufficient fiscal reserves to support the city’s economy,” he added

At the Tuesday press briefing, Mr Ho also stressed that his administration did not intend to “close border checkpoints” of the city, considering these channels have to remain open for the commuting of many cleaning and security workers employed in Macau, and for the supply of food to the city.

On Tuesday, Hong Kong confirmed the first death related to the novel coronavirus, the second such fatality outside mainland China. The first death outside China had been confirmed on Sunday by the Philippines. As of Tuesday morning, more than 20,600 cases and 427 deaths had been reported, with the majority of the reported cases – over 20,400 – in mainland China.