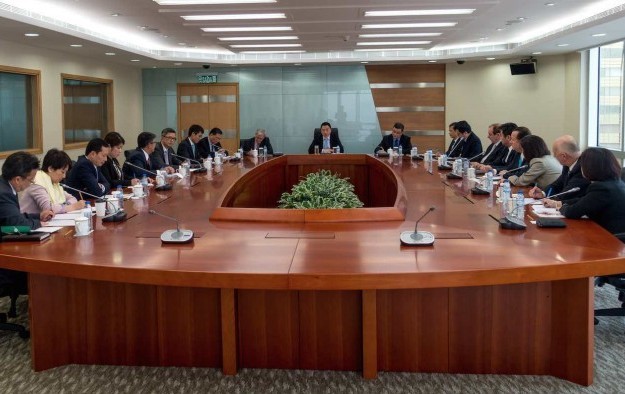 The comments were made during a meeting with senior representatives of the six gaming concessionaires.

Macau’s Federation of Trade Unions – which normally enjoys cordial relations with the Macau government  – was this week quoted saying local casino workers are dissatisfied with promotion policies by the city’s casino operators. The federation is one of several local labour groups with casino worker membership that plan to take to the streets in separate rallies on May 1. In Macau the day is known as Labour Day and has become associated in recent years with street protests on a range of social issues.

During the event, Mr Leong said the Macau government “placed great importance [on] the workers’ career[s]…, such as the opportunities for upward and horizontal mobility,” according to a government statement.

He added this would be “one of the factors to consider in the mid-term review [of] the industry”.

The review is scheduled to take place between 2015 and 2016. It aims “to get a closer look” at the performance of the holders of the six current casino concessions, according to the government statement. Those rights expire on various dates between 2020 and 2022.

The statement added that the representatives of the gaming operators said they were already boosting training opportunities. In addition, the firms would “provide more opportunities for workers” following the completion of their new casino resort projects in Cotai.

At Wednesday’s meeting, Mr Leong further stated “he believed the operators would strive to build a solid foundation in the industry”, even though the sector is currently undergoing “a period of consolidation”. He added the government expected casino firms to “provide more on-the-job training to workers as a preparation for developing more non-gaming elements”.

The government’s Labour Affairs Bureau and the Macau Productivity and Technology Transfer Centre would be open to provide “full support” to training of casino workers for higher positions, Mr Leong stated.

The Macau administration would also “continue to keep in close touch with the labour associations” to better grasp the working conditions in the gaming sector, Mr Leong said, quoted by the statement.

Macau’s Legislative Assembly (pictured) will conduct on Monday (January 24), during a plenary session, a formal first reading of the draft bill to amend the city’s gaming law, according to a... END_OF_DOCUMENT_TOKEN_TO_BE_REPLACED