No news on licence renewal in Macau mid-term review 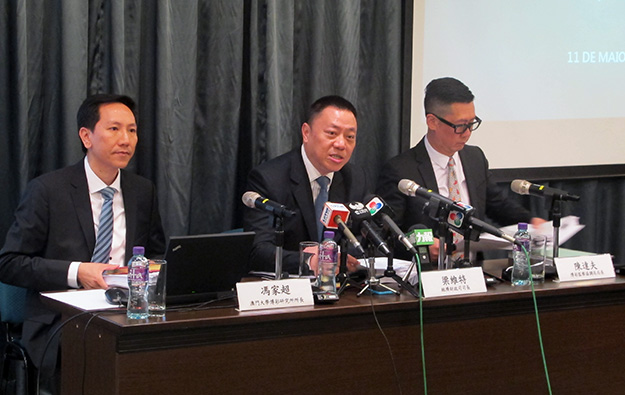 The Macau government’s “mid-term” review report of the local casino industry – disclosed on Wednesday – shed no light on the possible refreshment of Macau’s gaming concessions and sub-concessions.

The 254-page report – in the Chinese-language version – was unveiled at a press conference. The report was also published in Portuguese, Macau’s other official language.

The document gave no indications regarding the likelihood or otherwise of Macau’s existing concession and sub-concession holders having their gaming rights refreshed when the current contracts expire on various dates between 2020 and 2022.

“There is no direct relationship between this report and the gaming licence renewal process,” Mr Leong said during the press conference.

When asked by GGRAsia, Mr Leong provided no timetable for the process regarding possible refreshment of Macau’s gaming concessions and sub-concessions. Instead, he said the government’s focus in commissioning the mid-term review was to improve the operations of Macau’s casino firms.

“We are currently undergoing a period of adjustment [in the casino industry],” he said. “We should focus on promoting the sustainable development of the sector.”

The Secretary added that the government was meanwhile paying close attention to gaming-related developments in other Asian jurisdictions and their potential impact on Macau.

The findings included in the mid-term review report – commissioned by the Macau government from the University of Macau’s Institute for the Study of Commercial Gaming – were mostly quantitative.

The document featured a massive amount of data, including investment and operational indicators relating to each casino operator. The report also had a lot of macroeconomic data on Macau going as far back as the liberalisation of the gaming industry in 2002.

“This report shows that Macau’s social and economic development [since gaming liberalisation] has been quite evident and that the casino industry has had a positive contribution in that,” Mr Leong said during the press conference.

He added that the mid-term review findings would be an important reference for further improvement of gaming regulations as well as helping gaming operators enhance their operations.

Mr Leong noted that the rapid growth of Macau’s gaming industry since 2002 was “largely based on VIP gaming,” but it was now time to promote a more sustainable development.

“We cannot be reliant on a small group of players to bring in a large sum of revenue,” he stated.

Secretary Leong however stressed it was not government policy somehow to seek a systematic reduction in Macau gaming revenue. “New rules are aimed at correcting some insufficiencies in the sector and to eliminate irregularities,” he stated.

Mr Leong added that the industry should also promote a better balance between gaming and non-gaming revenue.

It stated: “Despite the positive role of junket promoters in the development process of the gaming industry, there are still bound to be problematic areas which needs stronger regulatory effort in order to enable a healthy and orderly development of the industry.”

Some of the junket-related issues highlighted in the mid-term review included: “excessive bargaining power [held by junkets] towards gaming operators”; “[regulation of] credits provided by junkets”; and occurrence of side betting in some VIP rooms.

At the press conference, the DICJ’s Mr Chan noted that out of the 183 junket promoters existing in 2015, 35 had not had their respective licences renewed, due to some failure to comply with new financial reporting regulations introduced in October.

Mr Chan added that DICJ had launched in February a review of all junkets in order to assess whether they are complying with the new requirements. The review was to be completed in six months, he added.

The head of the gaming regulatory body also said that the DICJ was currently reviewing regulations covering junket activity. The government “intends to raise the entry threshold” required to do business in the Macau junket sector, Mr Chan said, adding that the authorities were currently studying the topic. Options being examined by the DICJ included increasing the amount of capital junkets were required to pledge to support their operations.

During Wednesday’s press conference, Mr Chan confirmed the DICJ was looking into the possibility of a database listing people that owe overdue debts to junket operators related to credit issued for gambling. “In a preliminary stage, we consider this [a database] is viable,” he stated, adding that such tool however had to comply with Macau’s personal data protection rules.

A client bad debt database was “positive” and “important” for the development of the junket sector, Mr Chan stated.

Mr Chan stressed that the junket sector played a “very important role” in Macau’s gaming industry, as VIP gross gaming revenue still represented more than half of the local industry’s overall revenue. “We cannot deny the importance of gaming promoters, but also we cannot deny that there are problems [in this sector],” he added.

According to the mid-term review, Macau’s six gaming operators “have all fulfilled the capital commitment in their contracts”.

The document added that the gaming industry had “obviously created positive impact on the economy and society of Macau” but admitted there were also negative effects. The latter included adding upward pressure on inflation, housing prices and business operating costs.

Other problems highlighted in the mid-term review report were an increase in gaming-related criminality and the Macau economy’s over-reliance on the gaming sector, the document stated.

The review data included the fact that Macau’s six casino operators had invested MOP262 billion (US$32.75 billion) in the form of capital spending in 13 years through to 2014. According to the report, the overall figure was expected to increase, due to construction – in the Cotai district – of more casino resorts or expansion of existing ones.

An extract of the mid-term review in English – not an official language of Macau – said that while five of Macau’s six gaming rights holders had fulfilled the capital spending required as of the seventh year of their concession and sub-concession contracts being awarded, one – Galaxy Entertainment Group Ltd via its unit Galaxy Casino SA – technically had not.

But the review said this could be explained by the fact that some spending items of the MOP8.8 billion that Galaxy Casino had been contractually committed to spend within seven years, were actually transferred to its sub-concession partner Venetian Macau SA, a unit of what is now Sands China Ltd.

The review extract said: “The actual capital expenditure of Galaxy Casino SA within seven years from the date of the contract (June 26, 2002 to June 26, 2009) was only MOP7.588 billion, which is less than the required capital amount in the concession contract (MOP8.8 billion). However, according to the sub-concession contract between Galaxy Casino SA and Venetian Macau SA part of the items of Galaxy’s original investment plan has been transferred to the Venetian. Thus, according to the agreement, capital expenditure of the latter was calculated into the total capital amount of the former, with a limit of MOP4.4 billion.”

Galaxy Casino was initially made up of a joint venture between what is today Galaxy Entertainment and Las Vegas Sands’ subsidiary Sands China. The partnership quickly fell apart, reportedly over disagreement on the management of gaming assets.

In December 2002, the Macau government made a change to Galaxy Casino’s concession contract, which allowed it to have a sub-concession relationship with Venetian Macau SA. In practical terms, there are very few differences between a concession and sub-concession regarding the development and operation of casinos in Macau.

Following the issuance of the first sub-concession, SJM Holdings and Wynn Resorts were also subsequently authorised to have a sub-concession each, which they sold on – for US$200 million and US$900 million respectively – to MGM Grand Paradise SA, a subsidiary of MGM China Holdings Ltd, now controlled by MGM Resorts International; and Melco PBL Jogos (Macau) SA, a subsidiary of Melco Crown Entertainment Ltd.

The mid-term review report also noted that what it termed incidents of “non-compliance” by casino operators had also fallen in number in recent years.

The review said: “In terms of compliance status, the number of non-compliance cases in the six gaming operators [has] shown a downward trend. Cases of non-compliance include internal control and reporting deficiencies in prevention of money laundering and terrorist financing; execution of “Minimum Internal Control Requirements” and “Guidelines on Responsible Gambling”.

The 120-plus data tables included in the mid-term review included information on the market’s mix of gaming and non-gaming by revenue since 2002, the year of market liberalisation. Non-gaming business generated MOP23.2 billion for Macau’s operators in 2014, according to the report.

Scholar Davis Fong Ka Chio (pictured left) was also at Wednesday’s press conference. He heads the University of Macau’s Institute for the Study of Commercial Gaming.

Mr Fong noted that the mid-term review was the first of its kind in Macau. Asked by reporters about which gaming operator had achieved the best performance according to the review’s results, the scholar said it was not possible to make an assessment in those terms. He added that there were no gauges allowing for such types of comparison between operators.

Macau is to create distinct zones on its casino floors and designated gambling chips that will be solely for the use of players from overseas. The moves will be part of a new gaming tax system to... END_OF_DOCUMENT_TOKEN_TO_BE_REPLACED