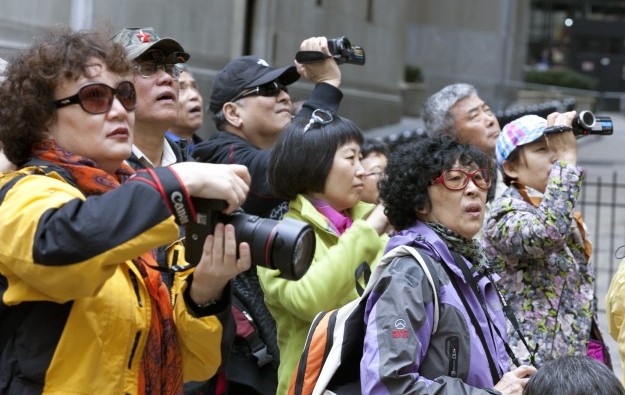 Chinese outbound travellers are spending more on travel itself and less on shopping, according to the third annual CLSA Chinese tourist survey from brokerage CLSA Ltd.

That has implications for the future appeal of Macau and Hong Kong to Chinese outbound tourists, suggests the brokerage’s report.

“We maintain our long-running forecast of 200 million outbound trips [by Chinese tourists] by 2020. That amounts to a 9-percent compound annual growth rate from 2015. However, that is weighed down by an expected 3-percent growth in Hong Kong-Macau, which currently account for 54 percent of all outbound Chinese tourists,” said the report authors, analysts Aaron Fischer and Marcus Liu.

They added: “If we exclude Hong Kong-Macau, we expect growth to experience a 16-percent compound annual growth rate to [the year] 2020.”

While CLSA noted that Hong Kong accounted for “about 59 percent” of all Chinese outbound trips in 2014, Chinese tourists primarily saw the city as a “shopping paradise”, with few new tourism attractions.

“As flagged in last year’s report, we are structurally negative on Hong Kong due to a lack of new attractions, increased competition, the strengthening Hong Kong dollar and negative attitudes towards mainlanders. While Macau is doing more to improve its tourist offering, it still faces challenges to attract non-gamblers. As a result, places like Japan, Australia, [South] Korea and the USA will see more Chinese arrivals,” noted the report authors.

The survey findings are listed in a 154-page report on the outlook for tourism from China and for the Asia Pacific casino industry. For the survey, the brokerage talked to 401 Chinese “experienced outbound travellers” in 25 mainland China cities. The average age of the panel was 35 and their average monthly household disposable income was RMB18,000 (US$2,738), said the institution.

Shop ‘til you stop

“Compared to the previous two years, one of the most noticeable trends is that Chinese travellers are more willing to spend on travel itself or the related experience, rather than shopping. Some 43 percent spent more than RMB8,000 on travel, which is 8 percentage points higher than 2014 and 11 percentage points more than 2013,” said the report.

In 2014, Macau was the second-largest recipient of mainland Chinese tourists after Hong Kong, with 21 million visitors, said the brokerage. The tally represented 18 percent of the total number of outbound Chinese tourists that year, noted CLSA.

“Slightly concerning is the low future retention rate. In our Chinese tourists survey, only 8 percent of those who visited Macau plan to return versus 37 percent for Japan, 26 percent for South Korea, 32 percent for Thailand and 25 percent for Hong Kong,” said the report authors.

“Macau does not offer a huge amount for tourists that are not interested in gambling,” they added.

“Clearly we see greater opportunity in these [other] provinces. As these provinces are further away, then we need to see an increase in hotel capacity as travellers will need to stay overnight. Generally, people prefer not [to] travel more than three to four hours for a day trip,” said Mr Fischer and Mr Liu.

The report authors noted in commentary on the tourist survey findings: “Clearly there are problems with [Macau] hotel room prices with 61 percent [of respondents] saying hotel room prices are too high and 48 percent of those who didn’t stay overnight”.

Macau had a total of 104 hotels and guesthouses operating at the end of November, providing 32,000 guest rooms, up by 13.4 percent year-on-year, according to the figures from the city’s Statistics and Census Service. The number of guestrooms in 5-star hotels totalled 20,000, accounting for 63.1 percent of the total supply. The majority of the five-star accommodation was in casino hotels and casino resorts.

Carlo Santarelli of Deutsche Bank Securities Inc said in a statistical update on the Macau market issued on December 18 that Macau’s Cotai district would see a further 8,800 hotel rooms added to the market between June 25 this year – when Wynn Macau Ltd’s Wynn Palace resort opens – and the end of 2017, when SJM Holdings Ltd’s Lisboa Palace resort is due to be ready.

“Increasing length of stay is a major opportunity for the [Macau] gaming and tourism sectors,” noted CLSA’s latest report.

The brokerage said overnight visitors’ length of stay in Macau was averaging 1.5 days versus 3.3 in Hong Kong, 3.6 in Singapore and 3.2 in Las Vegas.

“Clearly, there is direct correlation between spending and length of stay although the rate of spend slows down after the initial two days,” said the report.

“While it has been well flagged that Macau gaming revenue has fallen by 36 percent off the peak in 2013, this has mainly been driven by the collapse in VIP revenue. We still see significant potential to grow the mass market and this requires an expansion in hotel capacity and new non-gaming amenities to give reason for non-gaming tourists to visit,” it added.

In the meantime, opportunities abound for neighbouring jurisdictions to capture more Chinese tourist spending on gaming and non-gaming items.

“Our survey… reveals that, besides shopping; expanding cultural horizons is now high on their wish lists. Top destinations are South Korea, Japan, Thailand, Europe, the USA and Australia,” said CLSA.

“Australia’s share of the regional VIP market has grown strongly over the past 12 months (from 3.6 percent to 6.1 percent) as junkets and players continue to avoid Macau,” noted the brokerage, adding that “the risks are around early-stage moves by China to enforce the current limit on individuals taking money out of the country”.

The brokerage was upbeat on the appeal of Las Vegas to Chinese gamblers, noting that around 43 percent of Las Vegas’ annual table games drop in the past few years has come from baccarat – the Asian table gambler’s game of choice.

“The contribution has dropped [declined] in 2015 year to date through November to 40 percent as China’s anti-corruption measures have crimped Asian gambling in Las Vegas. However, the effect is much more muted compared to Macau given the geographic distance of the USA, and we expect any further impact to remain limited,” stated CLSA.

But the brokerage was more muted on the prospects for the South Korean casino market in serving Chinese tourists, noting that enforcement action by the Chinese authorities against marketing agents feeding Chinese VIP players to South Korea’s foreigners-only gaming venues had had a negative impact on the market.

“Korean casinos will not benefit from Chinese mass tourists as they don’t prefer to gamble in Korean casinos and their drop per person is too small to contribute to top-line growth. Correlations between Chinese inbound traffic and Korean casino’s mass sales growth have been very weak,” noted Mr Fischer and Mr Liu.