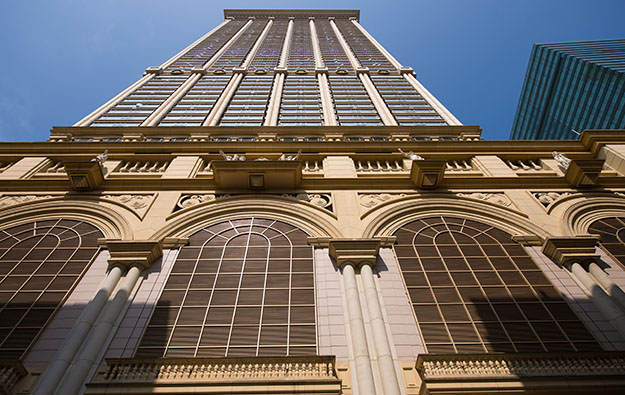 Macau-based VIP gaming promoter Guangdong Group opened on Thursday a new VIP gaming club at L’Arc (pictured), a casino hotel in the city’s traditional downtown casino district on the Macau peninsula. The junket group is also said to be interested in operating a VIP gaming room at MGM Cotai, a scheme currently scheduled to open in February.

The information was confirmed to GGRAsia by a source close to the junket group. The opening of the new Guangdong Group’s gaming club at L’Arc – a property operated under the gaming licence of SJM Holdings Ltd – represents the eleventh club that the junket group runs in the Macau market, said the person.

The new HKD27-billion (US$3.45-billion) MGM Cotai is likely to feature 12 direct VIP gaming tables upon its opening, according to Wednesday notes from banking groups Morgan Stanley and JP Morgan Securities (Asia Pacific) Ltd. Junket operations at the Cotai property are expected to be launched late in the first quarter or in the second quarter this year, according to the analysts.

MGM Cotai is the second property developed by MGM China Holdings Ltd. The exact opening date of the scheme has not yet been confirmed.

Guangdong Group is not the only Macau-based junket operator that is expanding its VIP gaming clubs.

Rival junket operator Meg-Star International told GGRAsia last month that it was preparing for “two new openings” of high-roller clubs in the city this year – one to be located at MGM Cotai; and another at City of Dreams Macau, a Cotai casino resort promoted by Melco Resorts and Entertainment Ltd. The opening dates for the two new clubs is yet to be disclosed.

Casino operator Melco Resorts and Entertainment Ltd announced on Thursday that it would launch at the end of June a new, themed zone for “family-friendly” entertainment at its majority-owned... END_OF_DOCUMENT_TOKEN_TO_BE_REPLACED