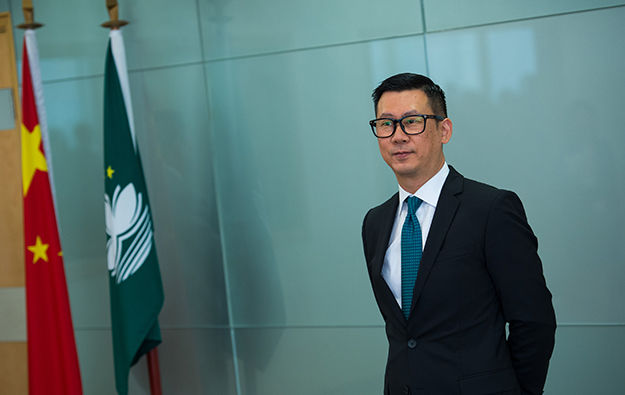 Macau’s casino regulator, the Gaming Inspection and Coordination Bureau – also known by its Portuguese acronym DICJ – is to authorise “slightly more than 120″ licences for VIP gaming promoters in the city for this year, the bureau’s director Paulo Martins Chan (pictured) said on Friday. Such licences are issued or renewed by the local regulator on an annual basis.

A decrease in the number was partly due to the bureau not renewing the permits of some gaming promoters that failed its inspection of their financial accounts, Mr Chan was cited as saying.

Chinese-language newspaper Macao Daily News quoted Mr Chan as mentioning the “slightly more than 120″ scenario for 2017 in comments on the sidelines of an event. Since 2007, the DICJ has published in January the number of licensed VIP gaming promoters in the market for the coming 12 months.

Speaking to the media outlet, the gaming bureau boss said that after Chinese New Year his department would conduct what he termed a special inspection of the local junket operators; including their general financial soundness and the amount of non-rolling chips they were holding on behalf of clients.

The bureau is also working on an ongoing revision to the rules that regulate the conditions and procedures for issuing a licence to junkets, said Mr Chan. He said a draft version of the revised rules would be ready this year.

As part of that process, the bureau would consider the question of whether only companies should receive junket licences. At present such permits can be issued to individuals.

The bureau would also mull a “considerable increase” in the amount of capital deposit that any newly-registered junket must lodge with authorities, according to the media report.

Kwok Chi Chung, president of the Association of Gaming and Entertainment Promoters, said last year that his group had suggested to the government raising the required deposit to MOP10 million (US$1.3 million), from the current MOP100,000 level set in 2014.

The regulator had announced in September 2015 that it would work on a revision of the local junket licensing rules, with a focus on new requirements for the amount of capital to be held and the shareholding structure of junket operators; as well as tighter rules on accounting and auditing. It had also been suggested that more information might be made public regarding the gaming promoters; such as the name of administrators, shareholders, key employees and collaborators.

The gaming bureau’s announcement followed an alleged fraud case amounting to tens of millions of U.S. dollars that rocked the Macau VIP gambling segment in September last year. At the time, Macau junket operator Dore Entertainment Co Ltd, an operator of VIP facilities at the Wynn Macau casino hotel, announced it had been a victim of internal fraud by a former employee.