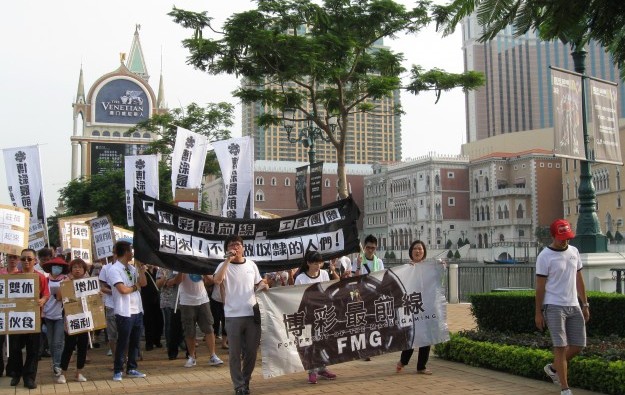 Macau labour group Forefront of the Macao Gaming is demanding a meeting with officials from gaming operator Sands China Ltd to discuss the company’s policies on pay and promotion of casino floor workers.

The group’s president Ieong Man Teng told local media on Monday that if the company does not meet with the labour group by Friday (August 1), it might organise a new protest or even a strike on August 28, the anniversary of the opening of casino resort Venetian Macao, Sands China’s flagship property.

The Forefront of the Macao Gaming last week staged a protest (pictured) outside of Venetian Macao. The police estimated the number of protesters at 900 people but the organisers put participation at 1,500 people.

The labour group accuses Sands China of not paying casino floor workers “reasonable” salaries and having “unfair” promotion strategies. Sands China has denied the accusations, saying the company’s salary levels and benefits schemes “are competitive in the marketplace and [the company] has proven track record in career advancement.”

Representatives from Forefront of the Macao Gaming on Monday met with officials from the government’s Labour Affairs Bureau at a two-hour, closed-door meeting. Mr Ieong said that around 200 Sands China casino floor workers, including dealers, dealer inspectors and supervisors, attended the meeting. The worker representatives requested the bureau mediate a meeting between the casino floor staff and Sands China.

Macau’s Secretary for Economy and Finance, Francis Tam Pak Yuen, last week said that the government pays close attention to the needs of casino workers, including when it comes to benefits and career progression. According to an official press release, Mr Tam added that the government would support casino staff “when needed”.

Mr Tam also confirmed that the Labour Affairs Bureau had received some complaints from casino workers regarding their employers, according to the government press release. The official said these complaints would be handled accordingly.

Casino equipment supplier Sega Sammy Creation Inc said in a Friday release it was debuting its Genesis Crest 43J cabinet in Asia. The product will be available at an in-person trade show, G2E Asia:... END_OF_DOCUMENT_TOKEN_TO_BE_REPLACED