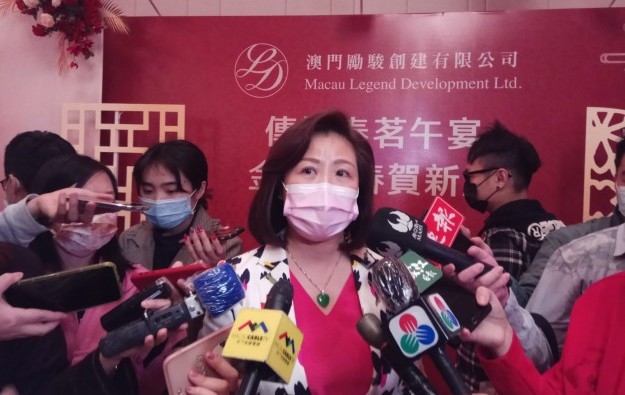 A senior executive at Macau Legend Development Ltd said on Monday that the casino-services and hotel-operations firm is aiming at being a Macau gaming concessionaire in its own right, with its revamp of its mixed leisure and gaming waterfront site Macau Fisherman’s Wharf being a route towards that.

The comments were by Melinda Chan Mei Yi, an executive director at Hong Kong-listed Macau Legend. She is also the president of Macau Fisherman’s Wharf International Investment Ltd – the latter the local operating entity of the waterfront complex.

“If… we get the chance to participate in the [gaming rights] tender, of course we will try our best to do it,” Ms Chan said on the sidelines of a Monday company event.

The Macau government said previously that it aimed to submit proposed amendments to the gaming law by the fourth quarter of 2021. Such a step has been flagged by the local authorities as necessary for the public rentender process.

“We will see what legal changes will come up later on relating to the casino concessions,” said Ms Chan, stressing that her company’s goal is to compete as a gaming concession contender in the future.

She was asked about the prospects post retender for all the existing so-called satellite gaming venues in the city – the model used by Macau Legend.

Ms Chan said that she did not believe the Macau government would seek to discontinue their business, considering the livelihood of the local employed population for these operators.

“Obviously for the satellite [gaming] operators, they have hotels, and they have a lot of local workers employed. If they are cut off [by the government] suddenly, that would affect a lot of local families… but of course it depends on what the government thinks,” said Ms Chan, also previously a legislator in the city.

Ms Chan told local media she “did not consider” running as a candidate for Macau’s upcoming Legislative Assembly election, due to take place later this year.

Her company hosted a media luncheon on Monday. At the occasion, Levo Chan Weng Lin, recently appointed co-chairman and chief executive at Macau Legend, said in an opening address that the firm was working on a “new development plan” for Macau Fisherman’s Wharf, and would share details on the plan once it was ready.

Macau Legend has undergone a board rejig following Mr Chan’s upping his investment in Macau Legend to 33.19 percent. The participation of the “new investors and management” is a showcase of their confidence in the prospect for Macau Fisherman’s Wharf, said Ms Melinda Chan in her opening speech delivered at the Monday event.

The addition of Mr Chan – known for his leadership at Macau major junket firm Tak Chun Group – brought fresh gaming-operation knowledge to Macau Legend, Ms Chan told the media on the sidelines of the event. But Macau Legend’s mass-market focus to gaming floors at the casinos in Macau Fisherman’s Wharf had not changed, she said.

Three casinos in Macau operate in association with Macau Legend, under the SJM Holdings Ltd licence. They are Babylon and Legend Palace, at Macau Fisherman’s Wharf, and Landmark, at another hotel on Macau peninsula.

“We are still sticking to our mass clients, with a focus to enhance our service. We hope that will help expand our existing customer base – this is our very goal for the future,” Ms Chan remarked to the press.

“For the junkets part, he [Mr Levo Chan] didn’t do anything for the time being because now is not a good time for junkets… all the junkets in the big casinos here have been quiet, and some even closed their rooms,” Ms Chan noted.

The immediate plan for Macau Legend’s new leaders for this year was to put new non-gaming tenants in Legend Boulevard – a walkway at Macau Fisherman’s Wharf. Most would offer food and beverage services, Ms Chan said.

She said the occupancy rate of the three hotels at the complex – Legend Palace, Harbourview and The Rocks – has been in aggregate higher than the market-average reported by the Macau government for the festive period, following some promotion efforts by the company.

For the overseas casino resort projects of Macau Legend, Ms Chan said that Savan Legend gaming resort in Laos has seen a “steady pickup” in business following its reopening several months ago, with the support by local patrons. But a “new wing” to the Laos gaming resort there – which will add hotel rooms – is yet to be launched, she noted.