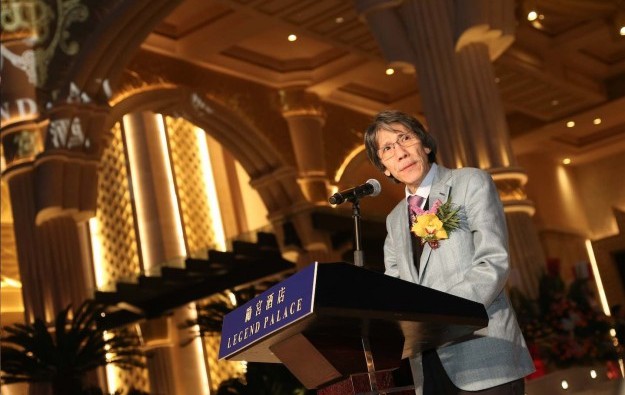 Hong Kong-listed Macau Legend Development Ltd says it reached on Wednesday a deal to buy a 21.5-percent stake in a company that is developing a shopping complex on Hengqin Island, an area in mainland China next to Macau’s Cotai district.

In a Wednesday filing to the Hong Kong Stock Exchange, Macau Legend – known as an operator of casino venues in Macau and Laos – added that the project in Henqin was majority controlled by Macau Legend chief executive and co-chairman David Chow Kam Fai (pictured in a file photo). Mr Chow is also the majority shareholder of Macau Legend, controlling a stake of about 34.0 percent in the firm, as per Macau Legend’s 2018 interim report, filed in September.

The latest deal by Macau Legend is for a stake in Macau-incorporated Lai Ieng Investment Co Ltd, which owns the “勵駿龐都廣場PONTO” project in Henqin. The scheme maintains Chinese-language characters in its official branding. The agreement involves a total consideration of HKD84.5 million (US$10.8 million), including the acquisition by Macau Legend of loans totalling more than HKD20.9 million.

“PONTO is the first large-scale shopping complex in Hengqin, with an investment value exceeding RMB1.6 billion [US$239.5 million],” Macau Legend said in its filing. “PONTO is strategically located at Hengqin and is approximately a 5-minute drive from Hengqin customs port. The total construction area of the project is approximately 140,000 square metres [1.5 million sq feet], and it will offer over 300 shops.”

Macau Legend added: “The board is of the view that the acquisition permits the group to take part in, and benefit from, the economic growth in the area of Zhuhai Hengqin New District… which is important for the group’s long-term development as well as the broadening of its revenue base.”

The filing made no reference as to whether there might be potential for branding or other commercial non-gaming partnerships between the Zhuhai project and the gaming assets controlled by Macau Legend in Macau, namely the Babylon Casino and the Legend Palace Casino. Both casinos are located in the Macau Fisherman’s Wharf complex, near the Outer Harbour Ferry Terminal on the Macau peninsula.

It was first disclosed in late 2012 that Mr Chow planned to develop a retail project on Hengqin Island. At the time, it was said the project – then with an estimated cost equal to US$250 million – would be ready in 2016, and its design would be inspired by 16th-century Portuguese architecture.

The mainland Chinese authorities envisage Hengqin as a draw for tourists, with non-gaming attractions to complement Macau’s casinos and tourism highlights. A highway and bridge joins the island to Macau’s Cotai district.

A ramping up of non-gaming tourism entertainment on Hengqin – to complement existing facilities there such as the Chimelong International Ocean Tourist Resort, which features hotels and theme parks and is popular with visitors from other parts of mainland China – has been touted as a way of developing a market for “two-centre holidays” that include Macau as part of the itinerary.

According to Macau Legend’s Wednesday filing, Mr Chow and his spouse are interested in 55.7 percent of the share capital of Raising Investment Co Ltd, one of the sellers in the operation. Li Chi Keung – also a substantial shareholder in Macau Legend with a 11.7-percent holding in the group – controls an additional 28.6 percent stake in Raising Investment.

Macau Legend has been expanding its international footprint in recent years, with projects announced for Portugal and Cape Verde. The firm said in late December it was buying a company that owns land in Cambodia that could eventually house a Macau Legend-branded “integrated resort”.

A global shortage of computing microchips is currently the biggest challenge for gaming machine manufacturers, says businessman Jay Chun (pictured in a file photo), president of the Macau Gaming... END_OF_DOCUMENT_TOKEN_TO_BE_REPLACED