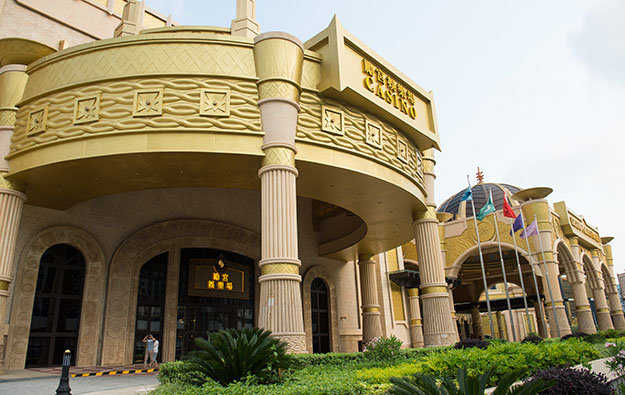 A company controlled by the father-in-law of an executive director of Macau casino services firm Macau Legend Development Ltd has agreed to promote three VIP gaming tables at Ka Sing VIP Club in a casino at the Macau Fisherman’s Wharf complex.

Friday’s filing to the Hong Kong Stock Exchange didn’t specify in which casino the tables would be placed. According to signs seen by GGRAsia, the Ka Sing VIP Club is located at the Legend Palace Casino and Hotel (pictured), the latest property from the Hong Kong-listed company.

The firm runs three casinos in Macau: Babylon Casino and Legend Palace (pictured), both at Macau Fisherman’s Wharf; and Pharaoh’s Palace Casino at the Landmark Macau. All the properties are located on Macau peninsula and are operated under the casino licence of Macau gaming operator SJM Holdings Ltd.

Under Friday’s agreement, Frank Wong – the beneficial owner of gaming promoter Sheng Li V Ltd, and also father-in-law of Sheldon Trainor, an executive director of Macau Legend – agreed with Macau Legend unit Hong Hock Development Co Ltd, to promote the VIP room for two years. The total number of tables to be promoted might change during that period, noted the document.

Hong Hock would also be entitled to receive from the promoter a licence fee of HKD270,000 (US$34,597) per month per gaming table as consideration for the licensing of the VIP room and expenses associated with it.

The filing also outlined that under an April 21 agreement, Seng Lei Loi Jewellery and Watches Co Ltd, a firm also controlled by Mr Wong, had agreed to a two-year lease from Macau Fisherman’s Wharf International Investment Ltd – the owner of Macau Fisherman’s Wharf and a unit of Macau Legend – on a shop at Legend Palace casino hotel for an aggregate fee of HKD450,000.

Macau Legend reported a consolidated loss of HKD277.5 million for calendar year 2016, and a HKD268.5-million loss in 2015. In July 2013, the group – whose co-chairman and chief executive is former Macau legislator David Chow Kam Fai – had raised net proceeds of approximately HKD2.06 billion from a global offering of shares, in order to fund expansion.

The verdict – and eventual sentencing – in the case involving Alvin Chau Cheok Wa (pictured in a file photo) and other defendants linked to the now-defunct Macau casino junket Suncity Group Ltd... END_OF_DOCUMENT_TOKEN_TO_BE_REPLACED