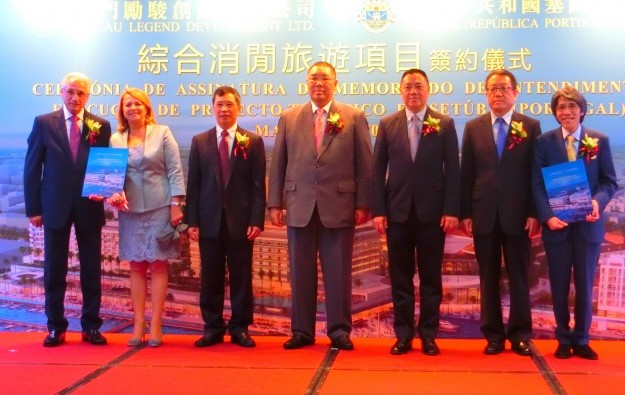 Macau-based casino services firm Macau Legend Development Ltd on Thursday entered into a memorandum of understanding with the Setúbal municipality government from Portugal, for the proposed development of an “integrated leisure, tourism and entertainment project” there. It is designed to feature gaming elements.

The budget for the Setúbal project will be between EUR100 million (US$110.8 million) and EUR500 million, depending on Portuguese government approvals of the project design, said Macau Legend co-chairman and chief executive, David Chow Kam Fai (pictured, first right), in comments to the media following a signing ceremony in Macau for the memorandum.

Macau Legend hopes to construct the new project on an 8.76-hectare (21.6-acre) site on a riverfront zone in Setúbal, Mr Chow said during the ceremony. The Portuguese coastal city is 48 kilometres (30 miles) south of Portugal’s capital Lisbon.

The first phase of the project, as described by the firm in a filing to the Hong Kong Stock Exchange on Thursday, will include a hotel, a shopping area, a residential area, a marina, a parking lot, a new multi-sport pavilion and a gaming arcade with slot machines.

Macau Legend intends to apply for the grant of the land needed for the Setúbal scheme, as well as to seek a licence to operate slot machines in the gaming arcade of the project, according to the filing.

On Thursday, Macau Legend also entered into what was referred to as a heads of agreement with the owners of a tourist facility near Setúbal, called the Tróia Design Hotel, which already possesses a casino gaming licence. Under this proposed arrangement, the hotel owners would inject their hotel property asset and casino licence – at an agreed value of EUR40 million – into a new joint venture to be formed by Macau Legend and the owners of Tróia Design Hotel. The hotel’s Tróia Casino features 220 slot machines and 13 gaming tables, according to Macau Legend’s Thursday filing.

Under the agreement, the joint venture company would be 55 percent owned by Macau Legend, which would inject EUR50 million into the entity, or provide a bank guarantee for that amount.

The joint venture would then be the entity developing the investment project in Setúbal, and would own and operate the Tróia Casino.

The joint venture company would also procure subordinated debt or bank loans to an aggregate of EUR100 million in order to finance the Setúbal project, according to Macau Legend’s Thursday filing.

Tróia is a peninsula located south of Setúbal across the Sado River estuary. It is approximately eight minutes’ journey by speedboat or about 15 minutes by passenger ferry from Setúbal.

“The Setúbal project and the Tróia casino will be complementary to each other by offering different amenities. This creates synergy between the two sites and allows our project to benefit from uniqueness from both cities [sic],” Mr Chow said in a speech at Thursday’s signing ceremony.

Speaking afterwards to the media, Mr Chow said that his firm believed in the growth potential for tourism in Setúbal.

“Besides the initiative of ‘One Belt, One Road’, any location that we think there is [potential for] growth, we’ll go there,” Mr Chow told media. He was referring to the Silk Road Economic Belt and the 21st Century Maritime Silk Road – also known as ‘One Belt, One Road’, or simply ‘Belt and Road’. They are initiatives of China’s President Xi Jinping, designed to link infrastructure and investment along China’s traditional East-West trade routes. Macau’s government – which is seeking to diversify that city’s economy beyond hardcore gambling – is touting Macau as a go-between for East-West investment projects and trade.

Sheldon Trainor, an executive director at Macau Legend, added at Thursday’s event: “The size of the [Setúbal] project will depend on the final design… we have to follow the process in Portugal for designing the project. This takes at least one year to figure out the land, the land transfer, and for the design to be approved. So at the end of that time we will know the final budget.”

Maria das Dores Meira (pictured, second left), mayor of Setúbal, also attended Thursday’s ceremony. She described the new investment project as a “complex” one, requiring the approval of several government bodies in Portugal. But she added that the project could help promote the city as a new destination for Chinese and other Asian tourists.

“We see no reason for the project not to be approved… but we need to conduct an environmental impact assessment,” Ms Meira told the media following the signing of the memorandum.

There is no schedule yet for the project to start or to be completed, she added. But she estimated that the project could create up to 3,000 jobs once all stages are completed.

“The Setúbal municipality will do its best to ensure [the project] starts as soon as possible, because it will create a lot of new jobs and promote economic development,” she said.

Macau’s health authorities said on Sunday that they would require all people wishing to enter the city’s casinos not only to have their body temperature measured and to display a... END_OF_DOCUMENT_TOKEN_TO_BE_REPLACED