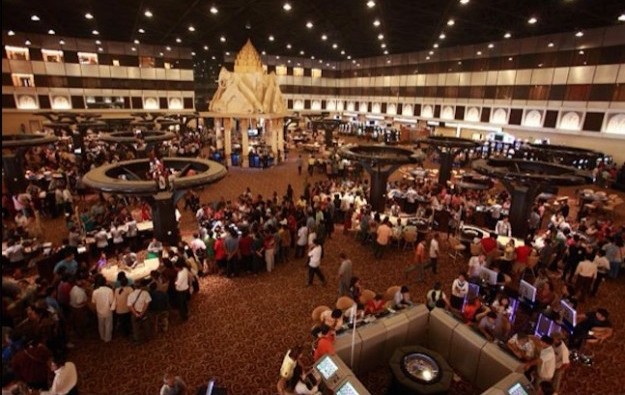 The results included four months of operations for a casino in Laos, a property until recently known as Savan Vegas Hotel and Entertainment Complex (pictured). The venue has been rebranded Savan Legend and is to be renovated and expanded starting in April.

The company reported adjusted earnings before interest, taxation, depreciation and amortisation (EBITDA) of HKD215.6 million for 2016, a decrease of 19.7 percent from 2015. According to the company the decline in EBITDA was partially related to an increase in pre-opening costs related to the launch of new projects.

Macau Legend posted a net loss of HKD277.5 million for the 12 months ended December 31. That compared with a loss of HKD268.5 million in the previous year.

“The loss for the year ended December 31, 2016 was mainly due to: declining revenue from mass market tables and outsourced VIP tables due to a decrease in overall gross gaming revenue generated from these gaming tables in the casinos within the group’s properties; and a decrease in interest income arising from fixed deposits,” Macau Legend said.

A the end of 2016, Macau Legend controlled a total of 179 gaming tables in Macau, of which 133 were put into operation, according to the firm. The group had 84 gaming tables in operation at Lao’s Savan Legend.

The firm developed and operates Macau Fisherman’s Wharf, featuring hotel and casino facilities. The group also runs the Pharaoh’s Palace Casino and the hotel at the Landmark Macau. The casinos are operated under the casino licence of Macau gaming operator SJM Holdings Ltd.

Another new hotel projected for Macau Fisherman’s Wharf – Legendale Hotel – is also to include a casino, according to Macau Legend’s annual results report. The property has been facing some public opposition after Macau Legend applied to have the building’s height increased by 50 percent, to 90 metres (295 feet). The government has yet to approve the request.

In is 2016 annual results announcement, Macau Legend’s management revised the property’s construction completion target date to the “end of June 2019”. Completion was initially scheduled for 2017.

Commenting on the company results for 2016, Macau Legend co-chairman and chief executive, David Chow Kam Fai, said: “Despite a weaker start to 2016, the market conditions for Macau appear to have stabilised and we are seeing some recent improvements in both mass markets and VIP markets.”

He added: “We are cautiously optimistic about the remainder of 2017 as the economy in China stabilises, infrastructure connecting Macau to the region improves and more non-gaming tourist attractions are added to the market.”

Mr Chow stated – in comments included in a company press release following the results announcement – that management was “now focused on ramping up revenues by consolidating existing and new customers at Macau Fisherman’s Wharf, and also aggressively reducing costs by optimising systems and operations.”

Mr Chow confirmed that the company “continues to be focused on completing the disposal” of the Macau Landmark casino hotel. The firm announced in March last year it had signed a letter of intent to sell the property to one of its shareholders.

Macau Legend began construction in February 2016 of its EUR250-million (US$270.4-million) casino resort in the African island nation of Cape Verde. Completion of the first phase of the development is targeted for 2019, according to the firm.

In July 2016, Macau Legend entered into a memorandum of understanding with the Setúbal municipality government in Portugal, for the proposed development of an “integrated leisure, tourism and entertainment project” there. It is designed to feature gaming elements. Macau Legend’s 2016 annual results report did not include new information on the project’s status.