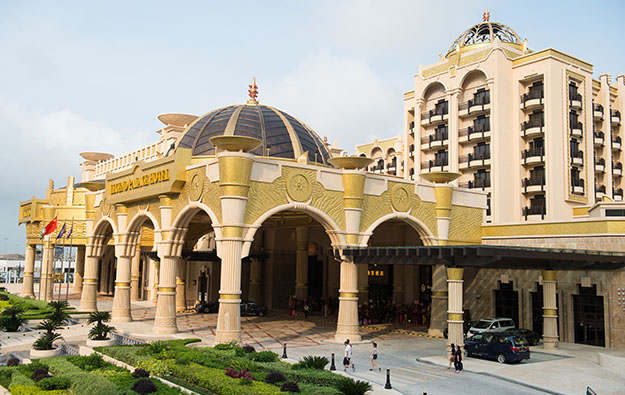 The company’s annual net loss however continued widening in 2017. Macau Legend posted a net loss of HKD507.3 million for the 12 months ended December 31. That compared with a loss of HKD277.5 million in the previous year, and of HKD268.5 million in 2015, it said in a Tuesday filing.

Legend Palace (pictured) – the latest Macau development from the Hong Kong-listed company – opened to the public in February 2017. The scheme’s casino and hotel operations were suspended for nearly four weeks last year due to flooding linked to Typhoon Hato, which hit Macau in August last year. It was the strongest recorded storm in the city for 53 years.

Another new hotel projected for Macau Fisherman’s Wharf – Legendale Hotel – is also to include a casino, according to previous filings by Macau Legend. The property faced some public opposition after Macau Legend applied to have the building’s height increased by 50 percent, to 90 metres (295 feet). In its latest release, Macau Legend confirmed it was “seeking to submit revised plans to expedite the development of a 60-metres tall Legendale Hotel.”

Macau Legend said in its filing that the number of visitors to Macau Fisherman’s Wharf had been increasing “for the past few months”. The firm said it planned to continue  “to host promotion activities focused on enhancing customer experience at the newly-renovated boulevards”.

Macau Legend mentioned plans to “initiate further upgrades in food and beverage outlets and additional varieties in entertainment to improve visitation and branding.” The completion of a footbridge to the nearby ferry terminal would also “enhance connectivity and improve visitation,” the firm said.

The Macau Legend 2017 results included the first full year of operations for a casino in Laos, a property previously known as Savan Vegas Hotel and Entertainment Complex. The venue has been rebranded Savan Legend.

Macau Legend reported adjusted earnings before interest, taxation, depreciation and amortisation (EBITDA) of HKD278.2 million for 2017, an increase of 29.0 percent from 2016. According to the company the decline in EBITDA was partially related to an increase in pre-opening costs related to the launch of new projects.

At the end of last year, Macau Legend controlled a total of 194 gaming tables in Macau compared to 179 one year before. Of these, 165 were put into operation, according to the firm. The group had 59 gaming tables in operation at Savan Legend in Laos.

Commenting on the company results for 2017 in a separate press release, Macau Legend co-chairman and chief executive, David Chow Kam Fai, said: “[The year 2017] was exceptionally impacted by three separate negative factors converging at the same time. Firstly, there was an increase in operating costs and depreciation due to the opening of Legend Palace Hotel and Casino. Secondly, [there was] damage to properties and equipment and loss of revenue as a result of Typhoon Hato. Finally, there was an increase in finance costs related to the group.”

He added: “The expected completion of the disposal of the Macau Landmark will substantially improve liquidity of the group and support development plans.”

The press release also mentioned plans to improve the non-gaming facilities at Savan Legend, with the aim of turning the location “into an entertainment hub for Southeast Asia, and a feeder market for our Macau facilities.”

Macau Legend began construction in February 2016 of a EUR250-million (US$310.4-million) casino resort in the African island nation of Cape Verde. The project however underwent changes, and had a new ground-breaking ceremony last February. Macau Legend said in its Tuesday filing it expected a building at the site due to accommodate an office complex would “be completed in 2018”.

In July 2016, Macau Legend entered into a memorandum of understanding with the Setúbal municipal government in Portugal, for an “integrated leisure, tourism and entertainment project” there. It is designed to feature gaming.

“The group is awaiting positive feedback from the authorities in Portugal in order for our intended developments in Setúbal to move forward,” Macau Legend said in its latest filing. “Once confirmed, the operation in Portugal can act as the hub for the European business expansion, and link with the Cape Verde operations,” it added.