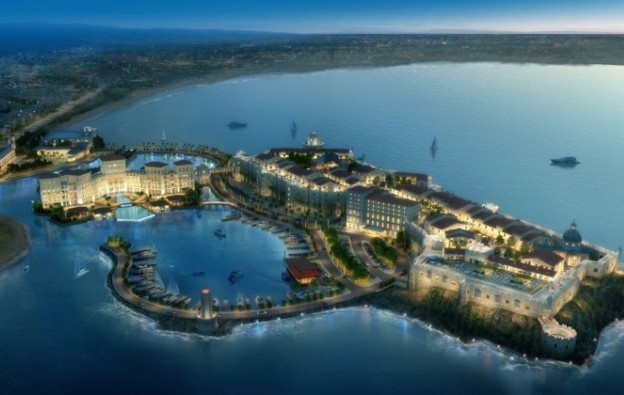 Casino services firm Macau Legend Development Ltd announced that it has signed several agreements with the government of the island nation of Cape Verde to develop a casino resort (pictured in a rendering) in the West African country. The firm plans to invest about EUR250 million (US$273.6 million) in the casino scheme, it confirmed in a filing on Wednesday.

The company said it intends to fund the development with “internal resources, bank financing and/or external debt/equity financing”.

The project – which will include luxury hotels, a casino, a convention centre and a marina – would be located on a 152,700 square-metre (1.6 million square-foot) land plot in Praia, the capital city of Cape Verde, on Santiago Island.

David Chow Kam Fai, co-chairman and chief executive of Macau Legend, acts as Cape Verde’s honorary consul to Macau. The agreements between Macau Legend and the Cape Verde authorities were finalised on Wednesday during a visit to Macau by Leonesa Fortes, the country’s Minister of Tourism, Investments and Business Development.

Macau Legend expects to start construction within 12 months, it said. Once building begins, the project should be completed within three years, Mr Chow stated on Wednesday.

“We will start very quickly, depending on the licences and approvals that are needed,” Mr Chow told reporters. He said there were no numbers yet for how many gaming tables the casino would have.

The project will be developed via Macau Legend’s subsidiaries in Cape Verde.

Cape Verde is keen to expand its tourism industry and has been developing policies for the creation of a gambling and casino industry. Three zones earmarked for casino projects were announced in 2012, respectively on the islands of São Vicente, Santiago and Sal. In 2013, a further two gambling zones were announced for the islands of Boa Vista and Maio.

In April 2013, a gaming concession was granted by the government to Royal Casino, for a casino to be operated on the island of Sal, according to reports by banks and local media.

Speaking to reporters on Wednesday, Ms Fortes said Macau Legend’s project would have a “significant impact” on Cape Verde’s economy, contributing to boost tourism numbers in the country. She added her nation hoped to attract 1 million visitors per year – especially Chinese tourists – after the completion of the Macau Legend project.

A report by the World Travel and Tourism Council said it expected Cape Verde’s travel and tourism industry to grow 7 percent year-on-year in 2015 to 497,000 visitors. The Council added that the industry had directly contributed 15 percent to Cape Verde’s gross domestic product in 2014.

In Wednesday’s filing, Macau Legend said its Cape Verdean unit has also been granted “an exclusive nationwide operation of online gaming, physical and online sports betting,” for a period of 10 years from the start of operations.

Under the agreements now announced, CV Entertainment Co is to pay a gaming tax amounting to 10 percent of its gross gaming revenue. The company will however be entitled – for the first five years of operation – to a deduction of 25 percent of gaming tax in relation to gambling by VIP patrons in the casino, the parent company said.

Macau Legend’s Cape Verdean operation will also be exempted from income tax and property tax for the first 10 years of its casino’s operation, but it will have to pay up to 1 percent of its gaming net profits for the promotion, development and research of cultural and social activities of Cape Verde.

It will also contribute approximately HKD1.2 million each year – starting in July 2017 – “toward the operational expenses of the gaming bureau of Cape Verde,” it added.

Macau Legend said in its latest filing that group wide and in the long term it expects to increase revenue “by diversifying the group’s business geographically and expanding into a new casino market”.

Hong Kong-listed Macau Legend runs two casinos in Macau: Babylon Casino at Macau Fisherman’s Wharf; and Pharaoh’s Palace Casino at the Landmark Hotel, both on Macau peninsula. The firm last week flagged a loss as likely for the first half of the year.

It is likely that Macau will shortly have a third round of citywide centre-based Covid-19 testing in little more than a week, after the results so far of a second mass test – that was due to finish... END_OF_DOCUMENT_TOKEN_TO_BE_REPLACED