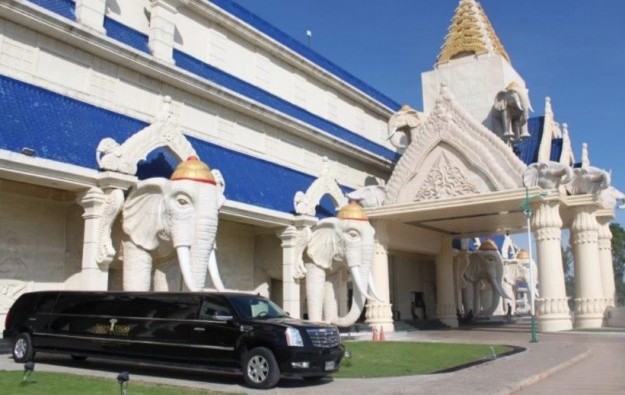 Hong Kong-listed casino services firm Macau Legend Development Ltd has confirmed to GGRAsia it is aiming to invest US$300 million to US$500 million across “several projects” in the Southeast Asian country of Laos. The firm already runs a casino venue there called Savan Legend Resorts (pictured), a property formerly known as Savan Vegas and located in Savannakhet, near Laos’ border with Thailand, a country where casinos are illegal.

“This range [of US$300 million to US$500 million] is a target for our potential investment in Laos over several projects and over a number of years,” a company spokesman told us by email in response to our enquiries.

“Our initial focus is to expand the current integrated resort in Savannakhet, Savan Resorts, as well as the local airport in Savannakhet. We are in active discussions with the [Laos] government,” the person added.

The firm’s co-chairman and chief executive, David Chow Kam Fai, noted to Macau Chinese-language media on Saturday that his firm was interested in developing one particular “large-scale integrated tourism and entertainment resort” project in Laos, and that it was applying to the Laos government for permission.

The company spokesperson subsequently told GGRAsia that the potential resort site referred to by Mr Chow was next to Savan Resorts. Mention of such a possible scheme was made in company filings and press releases in 2016. The land parcel was said to be part of Savannakhet’s Savan Seno Special Economic Zone. In an August 1, 2016 filing, Macau Legend mentioned the new resort might have two golf courses, 600 hotel rooms, villas, spa and pool facilities, a shopping arcade, an exhibition hall, medical tourism facilities, a floating restaurant, a botanical garden and “a dinosaur exhibition”.

The firm did not confirm us in its latest commentary if the proposed new resort would have a casino, or how the project would be financed.

Macau Legend announced in early September 2016 that it had “formally taken over” the management and operation of the casino scheme Savan Vegas Hotel and Entertainment Complex in Laos. The company paid US$42 million for the right to operate the property. The deal also includes the right to a 50-year monopoly on casino operations in three Laos provinces including the one where the resort is located. The three provinces mentioned in the 2016 deal were Bolikhamsay, Khammouane and Savannakhet.

“Macau Legend Development has a 50-year monopoly with an option to extend another 49 years for its zone of exclusivity [in the three provinces] in Laos,” noted the company spokesperson in their emailed reply to us.

“We are also working with the government of Laos to explore additional areas outside of the current zone of exclusivity to develop one or two more additional integrated resort projects in the country,” the person added, without giving further details.

China has moved one step closer towards reopening, by relaxing some its Covid-19 control measures, with most infected people now able to quarantine at home rather than in state-sanctioned... END_OF_DOCUMENT_TOKEN_TO_BE_REPLACED