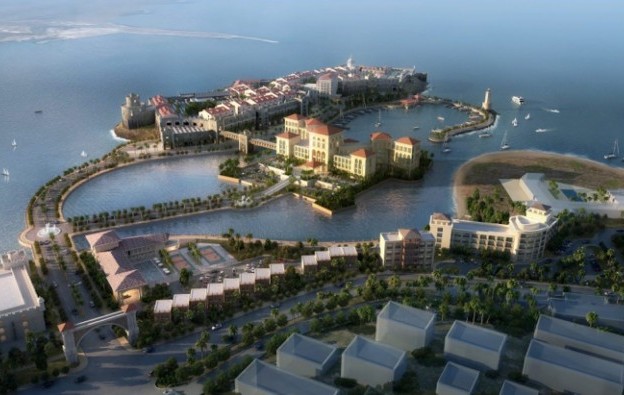 A ceremony to mark the event was held on Monday, attended by David Chow Kam Fai, co-chairman and chief executive of Macau Legend, and by Cape Verde’s Prime Minister, José Maria Neves.

“This project will allow tourism in Cape Verde to reach new heights,” Mr Neves said during the event, quoted by Portuguese news agency Lusa. He added that the government’s goal was to increase the number of annual tourist arrivals to the country from the current 600,000 to about 2 million over the next few years.

“This project is another pillar for the development and transformation of Cape Verde,” Mr Neves stated.

The Cape Verde project (pictured in an artist’s rendering)– which will include luxury hotels, a casino, a convention centre and a marina – was officially confirmed last year, after years of discussions between Mr Chow and the country’s government. As part of the deal, Macau Legend was granted a 25-year casino concession and “an exclusive nationwide operation of online gaming, physical and online sports betting,” for a period of 10 years from the start of operations, according to company filings.

The casino resort will be located on a 152,700 square-metre (1.6 million square-foot) land plot in Praia, the capital city of Cape Verde, on Santiago Island. It will be Cape Verde’s largest tourism resort.

Macau’s casino gross gaming revenue (GGR) for the first five days of February is estimated at MOP1.9 billion (US$235.1 million) – or MOP380 million per day – a level that suggests a “45... END_OF_DOCUMENT_TOKEN_TO_BE_REPLACED