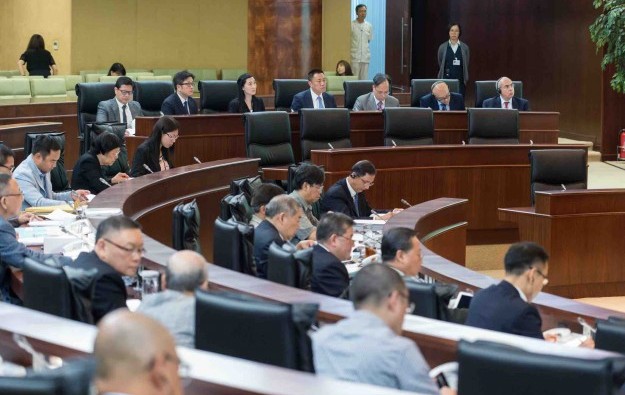 The VIP areas of Macau’s casinos will soon be required to set up smoking lounges, after the city’s Legislative Assembly (pictured in a file photo) approved on Friday evening – via a second and final reading – a revised bill on smoking.

Smoking on casino mass floors was banned in October 2014, but in areas designated as “VIP”, smokers have still been able to indulge their habit while at casino tables. Smoking lounges free of gaming machines have been allowed on some casino mass floors.

Under the city’s newly-amended Regime on Tobacco Prevention and Control, which will come into effect in January 1, 2018, Macau casinos will be given one year to install smoking lounges free of gaming in their VIP areas. All smoking lounges in casinos – including the existing ones set up on mass floors since the ban on free-for-all casino smoking – will also have to conform to enhanced technical standards. Those will be set by the government in a separate executive order.

During Friday’s debate, legislators focused mainly on the clauses in the bill that were related to smoking in casinos, with several speakers voicing opposition to the principle of smoking lounges.

Ng Kuok Cheong, a strong advocate for an outright ban on smoking inside casinos, said the revised bill was a “huge policy U-turn and a regression”.

“No matter how high-standard a smoking lounge is, there will always be chemical residue of cigarettes”, he stated, describing smoking lounges as “toxic chambers”.

“With the scale of our gaming industry, the six gaming operators should be more than capable of setting up pathways near casino facilities… that lead directly to outdoor smoking areas”, the legislator stated.

Another lawmaker, Au Kam San, suggested the legislation was not the end of the casino smoking issue, and would in likelihood lead to further disruption for casino operators at a later date.

“The government said this revised bill is a step forward, which means there will be more moves in the upcoming years… With more changes of regulation in the future, gaming operators will have to alter their facilities… and that requires financial investment”, he said.

Meanwhile, legislators Zheng Anting, a businessman from Macau’s junket sector, and Angela Leong On Kei, an executive director of local gaming operator SJM Holdings Ltd, respectively suggested the government had failed to consider the needs of casino employees by disallowing the installation of smoking rooms in casino employee rest areas.

“My staff members complained to me that they felt sleepy during working hours, because smoking can refresh their spirit. Therefore, the hope is that there is a smoking room in the staff resting area”, said Ms Leong.

The SJM Holdings executive also voiced her concern that some so-called satellite casinos – those making use of the gaming licence of one of the six Macau operators but with third-party management – might not be able to set up smoking rooms that adhere to government standards.

“The old satellite casinos want to improve their conditions to be more competitive. The authorities once said that they would handle cases flexibly according to different situations of different venues. Here, I would like to ask the officials if they are going to handle cases flexibly, and give those casinos some pragmatic technical instructions and [deadline] extensions if they need, so that they have time to make corrections”, she said.

Alexis Tam Chon Weng, Macau’s Secretary for Social Affairs and Culture, who attended the debate, did not directly respond to the questions of the legislator, but reiterated that the Macau government would continue to work toward the ultimate goal of eradicating the “hazard” of indoor smoking in Macau.

In a note in March, brokerage JP Morgan Securities (Asia Pacific) Ltd said that the impact on casino gross gaming revenue (GGR) of the revised bill should be “manageable” for casino operators. It estimated that the new rules would have a sector-wide impact in 2019 equal to approximately 5 percent of GGR.

A total of 328 people has been fined in Macau in the first half of 2017 for smoking in unauthorised areas inside the city’s casinos, up 18.4 percent year-on-year, according to Macau’s Health Bureau. The official data also showed that 83.5 percent of those who were fined were tourists.

Macau mass-market casino gross gaming revenue (GGR) for the recent Chinese New Year (CNY) holidays could have recovered to at least 60 percent of that for the 2019 break, when the festivities were in... END_OF_DOCUMENT_TOKEN_TO_BE_REPLACED