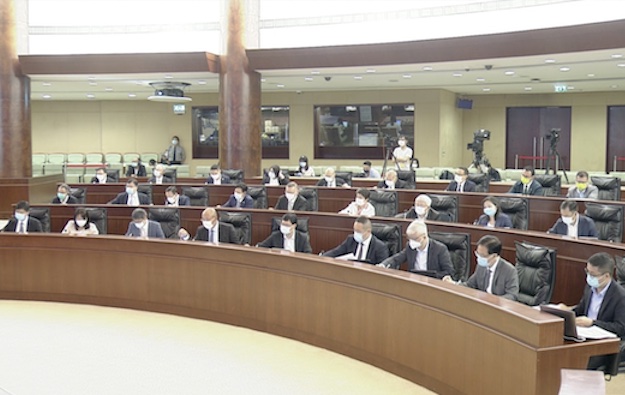 Members of Macau’s Legislative Assembly approved on Tuesday, via a second-reading debate and final vote at a plenary meeting (pictured), a government-backed bill to revise the city’s gaming law. The amendments to the gaming law were approved by the 32 legislators present at the meeting, during more than two hours of debate.

A legislature committee scrutinising the gaming law amendment bill had signed off its concluding opinions last week. The second draft of the bill, published on June 15, included several changes from the original draft that had been approved by legislators in a first-reading vote in January.

On Tuesday, Macau’s Secretary for Economy and Finance, Lei Wai Nong, said the government “hoped the revised gaming law would ensure the healthy development” of the city’s gaming sector.

The amendment bill says that up to six new concessions will be permitted, for a maximum term of 10 years, with a three-year extension possible under certain circumstances.

It also introduces a formal cap on the number of casino tables and gaming machines in the local market, and a minimum annual target of casino gross gaming revenue (GGR) that the city’s six operators will have to meet.

The latest draft also sets the tax payable on casino GGR at 40 percent, although it gives an incumbent Macau chief executive the discretion to reduce such tax burden by up to five percentage points for “reasons of public interest”, “namely” attracting “customers from foreign countries”. The change regarding the tax payable on casino GGR was one of the topics that raised more doubts among legislators during Tuesday’s debate.

Macau gaming concessionaires will be subject to a review by the city’s casino regulator, the Gaming Inspection and Coordination Bureau, every three years. The bill also states that the Macau government has the right to terminate the concessionaire’s contract for reasons including threats to national security, public interest, or breaching of its contractual obligations.

Casino equipment supplier Sega Sammy Creation Inc said in a Friday release it was debuting its Genesis Crest 43J cabinet in Asia. The product will be available at an in-person trade show, G2E Asia:... END_OF_DOCUMENT_TOKEN_TO_BE_REPLACED