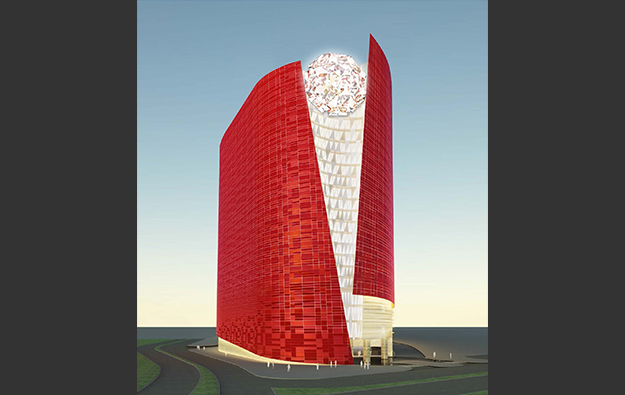 Hong Kong-listed Louis XIII Holdings Ltd says its under-construction Macau boutique casino hotel is on schedule to open in the summer of next year.

“Construction is proceeding on schedule,” the firm stated in a Monday filing.

It added: “All concrete casting was completed by the end of August. The ‘inner skin’ curtain wall was largely completed in October 2015 and we have commenced interior works.”

During the six months ended September 30, the group also continued hiring staff members for several departments of the complex, the filing added. The property is to be named Louis XIII (pictured in an artist’s rendering), according to Louis XIII Holdings’ website.

The property, on the Cotai-Coloane border, is described in the latest filing as an “exclusive luxury hotel and entertainment complex”. There is no mention of the inclusion of gaming facilities.

Previous company information did mention plans for a casino at the property, but Louis XIII Holdings has made no mention in more recent releases of gaming facilities at the venue. Instead, the firm has focused on positioning Louis XIII as an ultra-luxury venue, with features including a by-invitation-only ‘haute couture’ atelier and a 38-seat L’Ambroisie restaurant. L’Ambroisie in Paris has held three Michelin stars since 1988.

Louis XIII Holdings would need to utilise the casino rights of one of Macau’s six gaming concession holders in order to operate gambling at the property. It has not publicly named a gaming partner so far.

The firm did note in its latest filing that Macau is facing a sharp decline in gross gaming revenue – a year-on-year decrease of 36.2 percent in the first nine months of 2015. “Despite the anticipated volatile market conditions, the company feels that its niche strategy of targeting a global clientele of high net worth customers seeking a unique luxury experience is well positioned to compete in a slow market,” it stated.

Some Macau casinos visited by GGRAsia on Thursday, actually had tables that were closed, notwithstanding strong consumer demand during Chinese New Year (CNY). The reasons for some tables being... END_OF_DOCUMENT_TOKEN_TO_BE_REPLACED