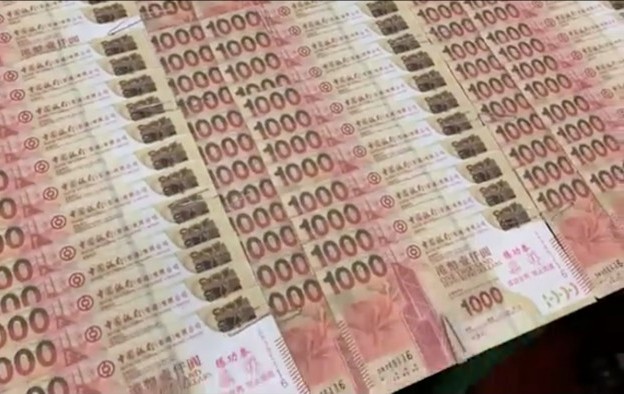 Macau’s Judiciary Police announced on Thursday that they had broken up a scam ring allegedly specialising in the use of ‘bank-teller training notes’ (pictured) in order to cheat gamblers in the city. The crackdown, which started in late March, was a joint operation with mainland China security units, the Judiciary Police told the local media.

The scam ring – which was headquartered in mainland China – was believed to have gained over MOP10 million (US$1.25 million) in illegal proceeds from 73 scam cases previously detected in Macau, said Sou Sio Keong, director of the gaming-related and economic crimes investigation department at Judiciary Police.

Members of the alleged scam ring were believed to have targeted gamblers in or around Macau casinos that sought to exchange Chinese yuan into Hong Kong dollars, Mr Sou explained in a Thursday media briefing. They used ‘bank-teller training notes’ – each carrying a face value of HKD1,000 – for their frauds, said the chief investigator.

The so-called ‘bank-teller training notes’ are commonly used by mainland China banks in training their tellers, Mr Sou noted. He has also said that the Judiciary Police had seen a “sharp rise” in the number of such cases in Macau between October and March.

A total of 103 people has been arrested so far in Macau, as well as in the mainland provinces of Guangdong, Shandong, Zhejiang, and Jiangsu, for their alleged involvement in the scam ring, Mr Sou told.

Police units in Macau and mainland China were still investigating whether more criminals were involved in the scam ring operation, the economic crimes investigator noted to the press.

Some Macau casinos visited by GGRAsia on Thursday, actually had tables that were closed, notwithstanding strong consumer demand during Chinese New Year (CNY). The reasons for some tables being... END_OF_DOCUMENT_TOKEN_TO_BE_REPLACED