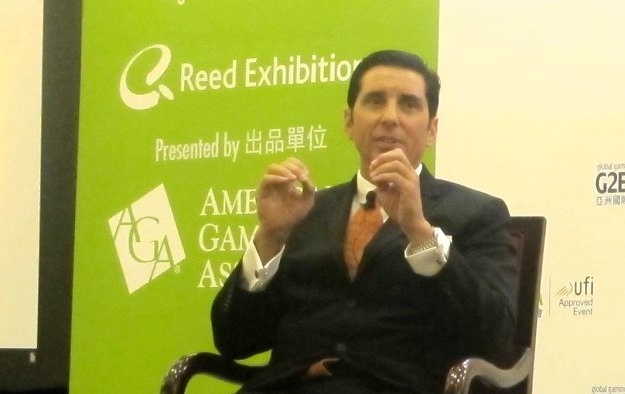 The ongoing slump in gross gaming revenue (GGR) in Macau is not good news for other Asian gaming jurisdictions, says Tom Arasi (pictured), president and chief operating officer of Bloomberry Resorts Corp, developer and operator of Solaire Resort and Casino in Manila, in the Philippines.

Mr Arasi made his comments while participating in a discussion panel on day one of the Global Gaming Expo (G2E) Asia 2015 conference. The three-day event is taking place at the Venetian Macao and concludes on Thursday.

The turnover loss Macau is suffering “is not necessarily being stashed away” by other Asian jurisdictions, Mr Arasi stated.

He added: “It is a general downtrend… [People should] try to assess it with all the major markets throughout Asia Pacific and see if overall [regional GGR] is growing. I suspect not.”

Morgan Stanley Research Asia Pacific said in a report in March that it estimated the global VIP gambling market had contracted by 8 percent in 2014, “largely due to the corruption crackdown in China and junket liquidity crunch that drove 12 percent decline in the VIP business in Macau in 2014”.

The Philippines and South Korea are both developing clusters of casino resorts close to the centre of their respective capitals. Some industry observers have said that could be an attempt to recreate the allure that Chinese tourists – especially VIP gamblers – already accord to Macau as a must-visit gambling destination.

“Before the malaise that hit this particular market [Macau], we already noticed – slowly but surely – our China business going up,” Mr Arasi said during his G2E Asia conference panel. “That is both junket [driven] as well as people who come to us directly,” he added, noting that the trend was linked to Chinese becoming wealthier, and having having an increased appetite for international travel.

He acknowledged however that the Philippines still has a “public relations problem” with Chinese VIPs when it comes to safety and infrastructure perceptions.

“It is not easy to have people to come and try the Philippines, but once we get it [their business], we have a great ability to bring them back,” Mr Arasi stated.

The casino executive added that the Solaire property currently has an “amazing 50:50 balance” between high rollers and mass players, with the majority of VIP play coming from overseas gamblers.

Bloomberry Resorts’ gross gaming revenue in the first quarter of 2015 increased by 14.6 percent as compared to the same period last year, the company said earlier this month.

The firm added that as of the end of March, Solaire – which first opened in March 2013 – had signed 84 junket operators, of whom 35 were active in the first quarter of 2015. Mass gaming continued to achieve what the firm called “sustainable growth” registering a 17.0 percent increase from the prior-year period.

Bloomberry Resorts did however show a loss of approximately PHP533.05 million (US$11.96 million) in its unaudited first quarter results, on costs that rose 42 percent. The firm reported an 100 percent increase during the reporting period in allowance for “doubtful accounts”, mostly linked to casino operations.

Solaire is one of four casino resorts with a minimum investment of US$1 billion approved for an area near Manila Bay known as Entertainment City. City of Dreams Manila, which had a soft opening on December 14, is also now operational. It is managed by a unit of Melco Crown Entertainment Ltd.