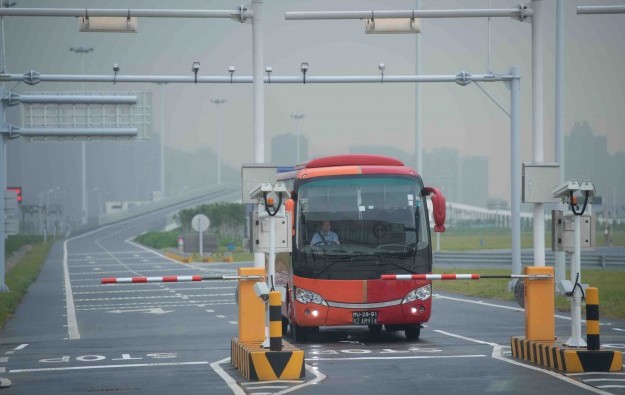 Visitor arrival numbers to Macau totalled 3.39 million in March 2019, up by 24.0 percent year-on-year but down 4.4 percent judged month-on-month.

The tally of overnight visitors was just over 1.58 million, an increase of 9.1 percent year-on-year, showed data from Macau’s Statistics and Census Service. The aggregate of same-day visitors was nearly 1.81 million, a 40.8 percent jump.

A number of investment analysts had recently mentioned that the growth of same-day trips to Macau had been stimulated by the opening in October last year of the Hong Kong-Zhuhai-Macau Bridge.

The cost of passenger tickets for scheduled buses using the bridge is considerably cheaper than for the high-speed ferries linking Macau to respectively Hong Kong and some cities in mainland China’s Guangdong province. Escorted tour groups can also be transported to Macau more cost effectively via bus than via ferry, some observers have suggested.

Gaming analysts have noted however that low-end tourists using bus services to enter Macau are not necessarily people that will be significant casino gambling customers in the city’s casinos.

Arrivals via the cross-Pearl River Delta bridge contributed to a 62.4-percent increase in visitors coming in via overland routes during March. The tally of overlanders was just over 2.50 million that month, with 1.79 million entering Macau via the Border Gate with Zhuhai – up 33.4 percent year-on-year – and 504,370 arriving via the Hong Kong-Zhuhai-Macau Bridge.

The statistics bureau’s tourist arrival data for March indicated the average length of stay of visitors to Macau held steady year-on-year at 1.2 days. The duration of visit for overnight visitors and same-day visitors was unchanged at 2.2 days and 0.2 day respectively.

The March aggregate of visitors from mainland China increased by 31.3 percent year-on-year to just over 2.38 million, with those travelling under the Individual Visit Scheme – totalling just over 1.06 million – rising by 24.0 percent.

The Macau government also offered information on the sum of visitors to Macau from the cities in China’s city-cluster project known as the Guangdong-Hong Kong-Macau Greater Bay Area. Those places are: Guangzhou, Shenzhen, Zhuhai, Foshan, Dongguan, Zhongshan, Jiangmen, Huizhou and Zhaoqing – all in Guangdong province – and the two Special Administrative Regions of China, Hong Kong and Macau.

The statistics bureau said that in March, the tally of arrivals from places in the Greater Bay Area grew by 16.6 percent year-on-year to nearly 1.37 million. Of those, 44.0 percent were from Hong Kong. Those arriving from Zhuhai and Guangzhou totalled 227,315 and 55,093 respectively, representing increases of 47.5 percent and 11.0 percent from the prior-year period.

The addition of the March data meant that for the first three months of 2019, Macau’s visitor arrivals tallied nearly 10.36 million, up by 21.2 percent year-on-year.

The average length of stay of visitors in the first quarter shortened by 0.1 day year-on-year to 1.1 days, with the average for overnight visitors (2.2 days) and same-day visitors (0.2 day) unchanged.