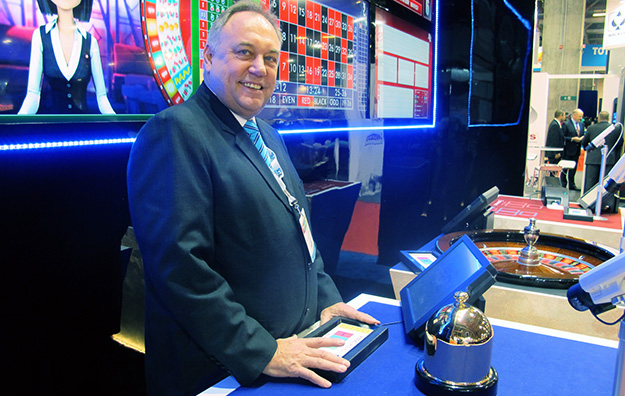 But Mr Jolly cautions: that will not trigger an overnight revolution in Macau’s gaming mix. The city will remain a table-centric market in the near- to mid-term, he says.

“We do believe that as the mass market continues to develop, and certainly [with] the pushing of that area, there is more opportunity for slot machines [and] electronic table games with both live dealer and non-live dealer,” Mr Jolly told GGRAsia during the Macao Gaming Show 2015, which ends today at the Venetian Macao.

He added: “We do see that [the slot segment] of the market will grow, but predominantly [Macau] is still a major table market. There are some 15,000 to 16,000 machines in the market, including the multi-stations as well. When you look at the size of the [Macau gaming] market, that is not really a big number.”

Mr Jolly stated that the total number of slot machines in Macau is still low compared with mature gaming jurisdictions. “Look at markets like Australia, with 200,000 machines, and North America, with 900,000 machines,” he added.

“[Macau] is not going to grow overnight to those sort of numbers or anything like that. But there is steady growth and there has been steady growth in the slot revenue numbers as well.”

Market-wide, slot machine revenue in Macau is likely in 2015 to post the first annual decrease since the first casino outside Stanley Ho Hung Sun’s monopoly opened in the city in 2004. Revenue from this segment stood at MOP8.8 billion (US$1.1 billion) for the first nine months of 2015, down by 22 percent in year-on-year terms, according to official data from Macau’s gaming regulator. Still, the segment outperformed the overall market. The latter contracted by 36 percent year-on-year in the January to September period.

The Macau casino market had fewer than 2,300 slot machine units in 2004. The number peaked at 16,585 in 2012. It declined in the following two years, but began increasing in the second quarter of this year, at the time of the opening of the second phase of casino resort Galaxy Macau in Cotai.

A number of gaming industry analysts have noted that the Macau government wants to shift the city’s tourism focus to mass-market entertainment – especially non-gaming varieties. Local authorities have stated that the number of new-to-market live gaming tables granted to each of the several casino resorts under construction on Cotai will depend on the non-gaming attractions offered by those venues. No similar restrictions exist for the number of new-to-market slot machines.

Slot machines are very popular in Western casino jurisdictions, and are a primary revenue source of mass gaming revenue. Industry analysts say mass players in places like the United States favour slot machines because they are reluctant to bet large amounts on table games – which usually have higher minimum bets than machines – and are reassured by the relative simplicity of playing slot machines.

Mr Jolly said one of the problems in Macau is that a large portion of the mass market comes from mainland China and these players are not familiar with slot gambling. “We need to make sure their learning experience, or their initial experience, is a good one to get them back next time they visit Macau,” he stated.

Commenting on the operations of Scientific Games in Asia, Mr Jolly stated the company was continuing to push ahead with the integration of gaming equipment makers Bally Technologies Inc and WMS Industries Inc, which it acquired over the past two years.

“We have been working on bringing the companies together under one company identity,” he said. “However, the brand names – Bally, SHFL, WMS… – will still exist as product lines within the group,” Mr Jolly added.

Mr Jolly said he was optimistic about the business outlook in Asia for Scientific Games.

“Asia has been a great market for the company from the point of view that there has been a number of openings in this market – in Macau, we have had two openings [in 2015] and there is another four to go in the next two years.”

He added: “There is growth in the Philippines – we [the industry] have got Tiger Resort, [Leisure and Entertainment Inc’s casino resort in Manila] to open and there is talk of some other casinos through regional Philippines.”

Scientific Games is also following up potential developments in other regional markets, including South Korea, Cambodia, Laos and Japan, he stated.

Mr Jolly said that one of the strengths of Scientific Games following the acquisitions of Bally Technologies and WMS was the scope and depth of its research and development capabilities.

“We are very fortunate with the amount of research and development houses we have as a company now. We can make games much more specific to an area,” he said.

“For Australia and for Asia, we actually develop [product] in Australia and in our studios in China. But if we see products coming out of our U.S. or India studios that we think will work in this market, we can bring that across as well,” Mr Jolly added.