Macau maxed out in 2018 on table cap: Ho on Morpheus 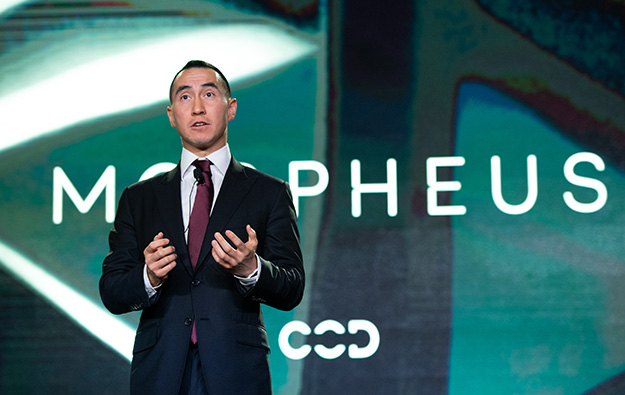 The Macau casino entrepreneur behind the US$1.1-billion Morpheus hotel tower that officially launched in Cotai on Friday said the reason the property did not get new-to-market live dealer gaming tables under the city government’s table cap system, was because the authorities had “maxed out” on table quota for the year.

Lawrence Ho Yau Lung (pictured), chairman and chief executive of Melco Resorts and Entertainment Ltd, the promoter of Morpheus, which is located at the City of Dreams Macau casino resort, said at the Friday press conference for the launch: “I understand the fact that the DICJ, this year, has maxed out the quota with the opening of MGM [Cotai], and the sub-pieces to…Wynn Palace and the Parisian [Macao].”

That was a reference first to the local casino regulator, the Gaming Inspection and Coordination Bureau, a body also known as DICJ, and third to Wynn Macau Ltd’s US$4.6-billion Wynn Palace, which launched in August 2016, and Sands China’s US$2.7-billion Parisian Macao, which opened a month later. They each got 100 new tables then, but two further tranches of 25 each, in January 2017, and January 2018.

When the nearby US$3.4-billion MGM Cotai resort launched in February, it got 100 new-to-market live dealer tables, with a promise of another 25 in January next year.

The gaming bureau told GGRAsia in an email on Thursday that while Melco Resorts would be allowed to shift 40 tables from existing operations to Morpheus at its opening, it would only be considered for new tables next year.

“When reviewing the application for gaming tables, the Macau SAR government has strictly adhered to the principle of limiting the number of gaming tables to not exceed a 3-percent annual compound growth rate for 10 years starting from 2013,” the gaming regulator told GGRAsia, referring to Morpheus.

“I think the government is looking at next year’s quota for us. And…we are okay with moving tables and reallocating them,” Mr Ho said at the Friday press conference.

Japanese brokerage Nomura said in a Friday note regarding no new tables initially going to Morpheus: “We do not view the issue as a negative. Macau is capacity constrained, not in its number of gaming tables but in its number of hotel rooms (or lack thereof) which is Morpheus’ main appeal. In our view, the most important driver for Melco [Resorts] isn’t its table count. It is the quality of Melco’s customer base, which we expect will improve with Morpheus.”

Mr Ho noted in his Friday comments: “Most of our competitors wouldn’t have undertaken a project like Morpheus. You can build 770 rooms with US$300 million. You don’t really need to spend US$1.1 billion. And you don’t need the amazing elaborations that we have.”

He added: “So far the Macau government has never failed us. And I think we have always been rewarded appropriately for the amount of investment.”

Mr Ho said that about 200 rooms at the Morpheus tower would be in use from Friday, with a further 100 rooms commissioned approximately every two weeks, so that all the rooms would be in service some time in July.

The CEO also clarified that the gaming space at Morpheus might be made available for the firm’s directly-managed VIP business – whereby credit for the rolling chip programme is issued by the house and credit default risk managed by the casino operator, rather than middlemen junkets typically used for that segment in Macau. Previously he had mentioned there would be no “junket rooms” at the hotel tower.

Mr Ho said: “We want to have the flexibility to see, in the long term, whether level-two of Morpheus should be for our premium mass or direct VIP. But in any case, Morpheus is definitely only to serve for our company’s best clients, but not to junkets.”

A casino cruise brand reportedly controlled by Malaysian entrepreneur Lim Kok Thay is to launch services from Singapore fewer than five months after the Lim family-founded Dream Cruises brand of the... END_OF_DOCUMENT_TOKEN_TO_BE_REPLACED