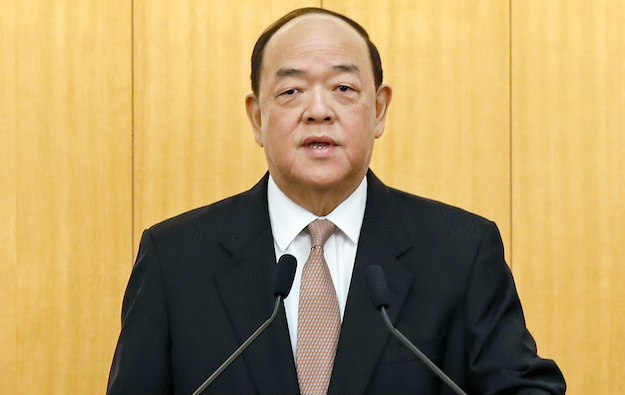 At a press conference on Thursday afternoon – the day Macau confirmed a second case of Wuhan-linked viral pneumonia and cancelled its Chinese New Year festivities – the city’s leader said, in response to reporters’ questions, that the control effort could not exclude the possibility of the government requesting a closure of the city’s casinos.

Chinese New Year is typically one of the busiest times for casino business in Macau – the only place in China where casino gambling is legal.

The Chief Executive (pictured in a file photo) – who only took office on December 20 – said the city had to “prepare for the worst”.

That included the possibility of asking Macau casino operators to close temporarily their properties if the city’s viral pneumonia outbreak became “very serious”, he noted in response to a local reporter’s question.

The advent of Typhoon Mangkhut – a major tropical storm – in September 2018, saw the first suspension of casino operations in the modern era of public gaming concessions. The pause – on the advice of the local government but requiring the industry’s consent – had lasted from 11pm on a Saturday, until 8am on the following Monday.

China had confirmed 619 cases of coronavirus as of 5pm on Thursday, with the death toll amounting to 17 people, reported mainland business news outlet Caixin.

At Thursday’s briefing by the current Chief Executive, Mr Ho said that the city’s Civil Protection Action Centre – a cross-departmental body designed to respond to public emergencies – might also be activated if things escalated locally.

“When Sars [Severe Acute Respiratory Syndrome] hit [the region] 17 years ago, Macau was lucky enough that it recorded only one imported case. But now, the viral pneumonia coincides with the peak domestic travel season for Chinese New Year across China,” Mr Ho said during the briefing, “That huge passenger traffic means the disease could be spread to each of the Chinese provinces.”

The Chief Executive additionally noted in the briefing that the local health authorities would – from Thursday afternoon onward – start efforts to conduct temperature-screening of people leaving Macau via the city’s border checkpoints. Temperature screening is already in place for those arriving in the city, and for anyone entering either the city’s casino resorts or government buildings. Outbound travellers showing signs of fever would be asked to undergo a medical check up. The idea was to try to contain the further spread of the coronavirus, said Mr Ho.

“We’ve cancelled the Chinese New Year celebratory events, including the Golden Dragon Dance and the parade. We’ve also asked the city’s associations to postpone their spring dinners,” said Mr Ho on Thursday. He noted the aim was to prevent any concentration of people in crowds, which might increase the risk of the virus spreading.

One of the events to be cancelled is this year’s edition of the Chinese New Year Eve banquet hosted by Sociedade de Jogos de Macau SA, the casino operating unit of Hong Kong-listed SJM Holdings Ltd. The event has traditionally been attended by the city’s incumbent chief executive. Separately, a lion dance blessing ceremony planned by another Macau casino operator – MGM China Holdings Ltd – for January 25, the first day of the Chinese New Year, has been cancelled, the firm announced.

At the local government’s Thursday-afternoon press briefing, Macau’s Chief Executive reiterated that the adminstration still did not plan to impose any restrictions on incoming visitors, including those from Wuhan. The latter city has however temporarily suspended public transport links, including outbound planes and trains, according to a Thursday announcement.

As of January 22, there were more than 4,000 residents of Wuhan city in Macau, according to Macau government data. The tally included tourists, students and non-resident workers.

In a separate release, Macau’s casino regulator the Gaming Inspection and Coordination Bureau noted that it had confirmed that medical masks were being used by all casino staff across the 39 casinos in Macau. The move was implemented by the government on Wednesday in accordance with the local law on infectious disease control.

Bloomberry Resorts Corp – the operator of Solaire Resort and Casino (pictured) in the Philippine capital Manila – on Wednesday announced in a series of filings, that an aggregate of just over 7.9... END_OF_DOCUMENT_TOKEN_TO_BE_REPLACED