Macau must be more than shopping hub: G2E Asia panel 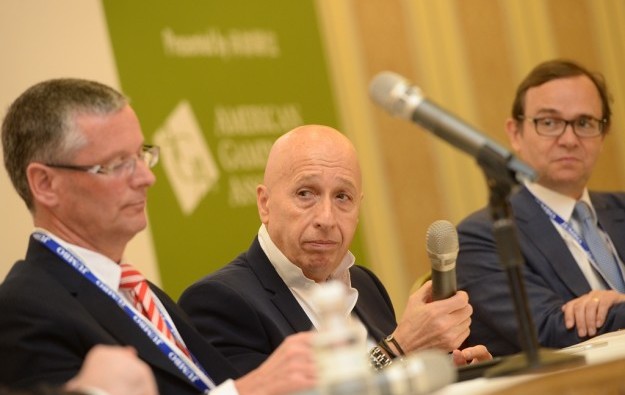 Macau has to be more than a shopping destination as the city’s government seeks to rebrand itself from gambling hub to world centre of tourism and leisure, suggested on Wednesday a panel of gaming and retail industry experts.

Luxury retailing was now widespread in the region, and competition for Chinese shoppers’ cash had gone global, they added.

They were speaking on Wednesday during a conference session at the Global Gaming Expo (G2E) Asia 2016, a casino industry trade exhibition and conference being held at the Venetian Macao casino resort.

“Macau needs to reinvent itself to fit into what younger people want and what the future is,” said Allan Zeman (pictured, centre), a Hong Kong property developer and vice chairman at Macau casino operator Wynn Macau Ltd. He is also an independent non-executive director of the firm.

China’s crackdown on corruption – initiated by President Xi Jinping –and the fact that many wealthy Chinese people now prefer not to show their wealth, had “changed Macau overnight,” Mr Zeman argued.

“No one was expecting it… and maybe it came too late for many hotel operators” that had made commitments to opening large-scale resorts, he noted.

“The whole gaming business has changed,” as operators started looking more to the mass market instead of the VIP gambling segment, Mr Zeman said, adding “retail itself also suffered”.

Going in search of customers spending money on non-gaming items has become “very important,” he pointed out.

He stressed that should not be done just by the casinos. “The government itself needs to upgrade the city to make the package to attract more people… Macau needs to become world class. Then, you will have a very strong story to sell, not just to mainland China, but to the world,” Mr Zeman said.

Another speaker on the panel, Kevin Clayton (pictured, left), chief marketing officer at Macau casino operator Galaxy Entertainment Group Ltd, agreed there was a need for a long-term vision of what the city should be.

But he added that Macau, “in the short-term [should]… put on its best face” for consumers from China and other parts of Asia.

“Whether that’s online or offline, the way that we are promoting Macau in conjunction with MGTO [Macao Government Tourism Office] at the moment, is, you could argue, failing us,” he said.

“If you want to draw more people and more traffic to Macau, then Macau needs to do two things: one, it needs to have more attractions […]; second.., to have some very powerful forms of communication back into China,” Mr Clayton argued.

Mr Clayton also said gaming operators needed “to work very closely,” with each other and “probably very closely with MGTO”.

“When we are in a very competitive regional market, it’s about what we do together, as well as what we do individually,” he stated.

Nick Bradstreet (pictured, right), managing director for leasing at property services firm Savills (Hong Kong) Ltd, pointed out that Hong Kong and Macau now faced competition from other destinations for the wallet of mainland Chinese shoppers. Some of those tourists are willing to travel overseas to do their shopping. Even though Macau is still “very profitable for the brands,” it has to adapt “pretty quickly”, he stated.

“In today’s world, because of online shopping, young people don’t go to shopping malls,” he noted.

“The exclusivity in luxury [shopping] got lost,” said Mr Zeman, referring indirectly to the rapid expansion of luxury brand outlets in the region and beyond.

Such brands “need to reinvent” themselves, he stated. Shopping, added Mr Zeman, “needs to be a very experiential thing”.

Catherine Lim, Asia senior consumer analyst at Bloomberg Intelligence – another speaker on the panel – also noted shoppers are now “much more sophisticated,” and that poses “a big challenge,” for tourism destinations as “things are evolving very quickly”.

She stated: “Reaching out for the shoppers… is about understanding what draws these educated, sophisticated shoppers to stores.”

“I do see a lot of opportunities for operators to work hand in hand with the brands, the retailers or even on the entertainment front. If we can actually package everything together […] it works and it could be a global phenomenon,” Ms Lim said, suggesting South Korea has had some success in that regard.

Stocks of Macau casino operators rose substantially in the Hong Kong market on Monday, after the local government announced on Friday a bill proposing a new regulatory system for gaming... END_OF_DOCUMENT_TOKEN_TO_BE_REPLACED