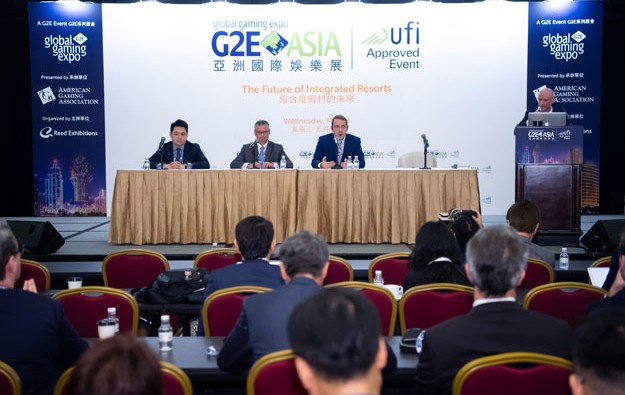 Macau would need to build a further 100,000 hotel rooms in order to increase its share of non-gaming revenue to the heights seen in Las Vegas, but lacks the available land supply to do so, two gaming executives said on Wednesday.

They were speaking during the conference session “Business Trends for the Integrated Resort (IR) Model in Asia Pacific”, moderated by Michael Grimes, a principal at GGRAsia, at Global Gaming Expo (G2E) Asia 2018 at the Venetian Macao.

As of the end of March, Macau had a total of 39,000 hotel rooms. Rooms in five-star properties accounted for 61.2 percent of the total.

In a February report, analysts Praveen Choudhary, Jeremy An and Thomas Allen of Morgan Stanley banking group said “non-gaming revenue as a percentage of total revenue is roughly 12 percent for Macau and may never reach 65 percent as it has in [Las] Vegas”.

Andrew Lo Kai Bong (pictured left), executive director of Hong Kong-listed casino developer Suncity Group Holdings Ltd, told the conference session that one factor that differentiates both cities is their gaming tax. While Macau’s gaming tax accounts for 39 percent of all casino revenue, in Las Vegas it never goes above 6.75 percent. “If we could cut the tax rate to as low as in Las Vegas, we could have as much non-gaming,” he said.

However, Mr Lo also stressed that the Nevada gaming city has “five times more rooms than here in Macau”. And that is a gap that will not be bridged any time soon, the Suncity executive director added. “How can we build another 100,000 rooms? Where is the land? Will Hengqin help us?,” he asked.

Macau casino operators, including MGM China Holdings Ltd and Galaxy Entertainment Group Ltd, have shown interest in investing in Hengqin, an island that is a piece of mainland China territory neighbouring Macau. Galaxy Entertainment has already signed a framework agreement for a CNY10-billion (US$1.50-billion) non-gaming project on a 2.7-square-kilometre (1.0 sq mile) parcel of land on Hengqin. The firm has plans to build a low-rise, low-density resort there, according to company filings to the Hong Kong Stock Exchange.

“If a mainland couple wants to come to Macau for a weekend, it’s so expensive. With that money you could spend four nights in Taiwan,” stated Mr Lo. “It’s a good thing to have more rooms. More choice is always better,” the Suncity Group executive director stressed.

Mr Clayton for his part recalled that Macau casino concessionaires had posted HKD7.5 billion (US$1 billion) in non-gaming revenue in the first quarter of 2018. “Other regional operators would give an arm for that kind of money. It’s not like we don’t have a non-gaming market, it’s just that it’s dwarfed by casino numbers. Concessionaires are doing a pretty good job,” the Galaxy Entertainment chief marketing officer said.