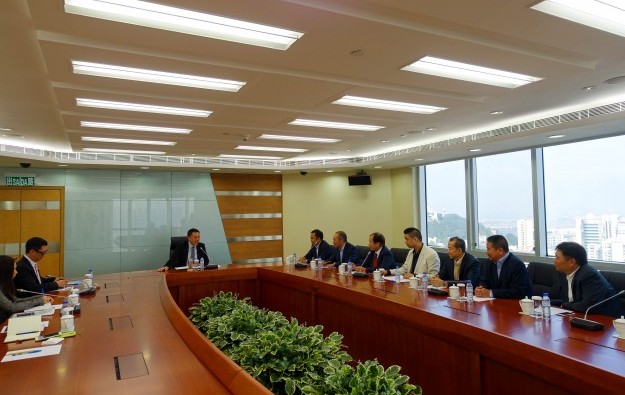 Macau should create a gaming industry with “unique local features”, according to the city’s Secretary for Economy and Finance, Lionel Leong Vai Tac.

Mr Leong’s comments were included in a government press release issued on Thursday, following a formal meeting with representatives from the Macau Junket Operators Association (shown above). The new head of Macau’s gaming regulator, Paulo Martins Chan, was also at the meeting.

Thursday’s release did not go into details on what Mr Leong meant by “unique local features”.

The Secretary reportedly said during the meeting that there was a “pressing” need to improve the legal framework for the city’s gaming industry, to promote its “healthy development” amid the ongoing changes in the local economy.  Mr Leong added there was also a need to strengthen law enforcement and monitoring of the industry.

He stated that a “healthy development” of the junket sector could play a role in promoting a sound future for Macau’s casino industry as a whole. Mr Leong said he was willing to cooperate with all gaming industry operators to draft rules that could protect clients and promote a “trustworthy and quality” industry.

Several investment analysts covering the gaming industry have warned that tightening regulation may hurt the city’s junket sector. “If Macau tightens junket regulations, we feel that more small junkets will go out of business after Chinese New Year [February 8], and even [the] bigger junkets may face redemption pressures,” Deutsche Bank AG analyst Karen Tang wrote in a note issued on Tuesday.

Thursday’s meeting  between Mr Leong and representatives from the Macau Junket Operators Association was the second such meeting in the course of three months to be made the subject of a press release by the Macau government. The latest chronicled meeting took place days after police received a complaint claim about an alleged fraud case linked to VIP room business at L’Arc, a casino hotel on Macau peninsula. The case involves funds totalling HKD99.7 million (US$12.9 million).

This was the third high profile fraud case reported in Macau’s casino VIP segment in fewer than two years.

Macau’s current cycle of junket troubles began in April 2014, when a junket operator called Huang Shan – who had offered what was described in some reports as a monthly “dividend” of 2.5 percent to junket investors in exchange for junket capital – fled with an amount reported to be as much as HKD10 billion.

During Thursday’s meeting, Mr Chan reportedly said the improvement of the legal framework for the city’s gaming industry was one of the priorities of the gaming regulator. He noted junket operators have been playing a role in Macau’s gaming industry and pledged to work together with the sector to improve its public profile and competitiveness.

Both the Macau government and the junket representatives agreed on Thursday to hold regular meetings to improve communication between both sides. No further details about that were provided in the government release.

SOFTSWISS Jackpot Aggregator is cooperating with Curaçao-licensed Spinago to launch the latter’s worldwide jackpot campaign for the online gaming sector. The information was given by SOFTSWISS, a... END_OF_DOCUMENT_TOKEN_TO_BE_REPLACED