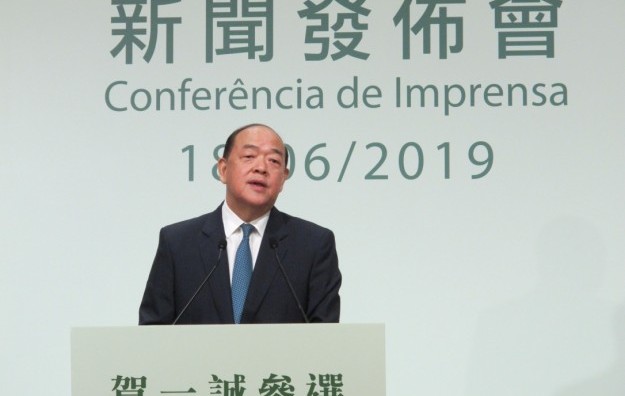 Macau’s gaming industry is a pillar of the local economy and local taxation, but the sector should be kept in a state of “healthy development”, said on Tuesday, Ho Iat Seng, a veteran of Macau politics.

Mr Ho (pictured) was responding to a question from GGRAsia at a press gathering where he made a formal announcement about his wish to become the third person to be Macau chief executive since the city’s handover from Portuguese administration in 1999.

He was also quizzed by several media outlets on his views regarding various political and social topics related to Macau.

Mr Ho, president of the city’s Legislative Assembly, had identified himself in April as a prospective candidate for the role of next Macau chief executive, but cannot formally become a candidate until July, once nominations close. On Monday, Macau’s Official Gazette stated that the elective process to select the next chief executive would take place on August 25. Fernando Chui Sai On, the current Chief Executive, will complete his second and final five-year term in December.

It is not clear currently whether Mr Ho will run unopposed for the top job. He is not related either to Edmund Ho Hau Wah, the first Macau chief executive, or to Stanley Ho Hung Sun, the former monopolist of Macau casino business.

Asked on Tuesday about whether a retender process for Macau gaming rights – the current six licences expire in 2022 – might involve the option of  increasing the number of licensees, Mr Ho stated: “Would it be seven licences, or six, or eight? This is not in my scope of considerations until the gaming law is amended.”

The need for the amendment of that legal framework prior to a retender process was reiterated last month by Lionel Leong Vai Tac, the city’s Secretary for Economy and Finance.

In April, Mr Chui had said there was no need to delay the launch of a fresh public tender for gaming concessions. He mentioned two main tasks that the government had to carry out: revising the Macau gaming framework law – also known as Law No. 16/2001 – and revising Administrative Regulation No. 26/2001, which provides the terms and conditions of the public tender organised to grant concessions to operate casinos in Macau.

Prospective candidate Mr Ho said on Tuesday: “I won’t comment further here on what the direction should be for the gaming industry. But I think the only way it should go forward is to be kept in healthy development.”

He added that as of Tuesday, he would be formally resigning as Legislative Assembly president and as a legislator, in order to pursue his candidacy for the chief executive role.

The selection of a Macau chief executive is achieved not by direct voting among the adult population, but by a 400-strong election committee including representatives of various sectoral interests including industry, commerce, finance, labour and education.

Would-be chief executive Mr Ho is 61 and was born in Macau. He has been Legislative Assembly president since October 2013. From 2009 he has been an indirectly-elected legislator representing the city’s industrial and financial professionals, under Macau’s hybrid electoral system for the Legislative Assembly. From 2004 to 2009 he was a member of the city’s Executive Council, an advisory body that supports the work of the city’s chief executive.

Mr Ho also has long-running ties with political structures in mainland China. He has been serving as a member of the Standing Committee of the National People’s Congress (NPC) since 2000. On April 23 the Standing Committee approved Mr Ho’s request to resign from his NPC role, a move that clears the way for his candidacy for the top Macau job.

At the Tuesday press event, Mr Ho noted that the new chief executive would need to address the issue of integrating the city in the economic development of Guangdong-Hong Kong-Macau Greater Bay Area, a central government initiative to bind more closely the economies of Guangdong province and China’s two Special Administrative Regions, Macau and Hong Kong.

He also remarked that he had an understanding of Macau’s “livelihood issues” – usually a reference in Macau to supporting local people’s standard and quality of living – particularly the housing-affordability issues facing the younger generation in the city.

It is likely that Macau will shortly have a third round of citywide centre-based Covid-19 testing in little more than a week, after the results so far of a second mass test – that was due to finish... END_OF_DOCUMENT_TOKEN_TO_BE_REPLACED