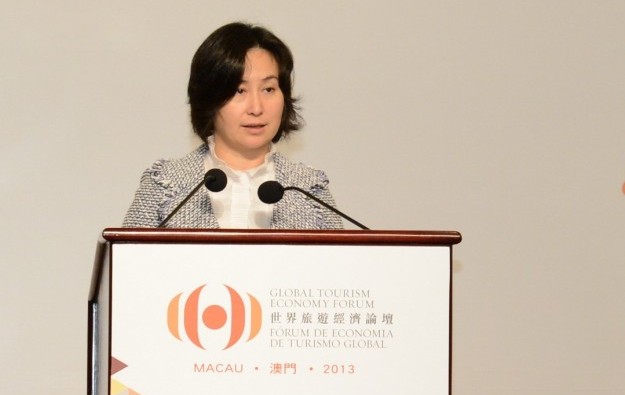 “The labour issue is the biggest challenge,” Ms Ho told reporters on Tuesday on the sidelines of an international tourism forum in Macau. “We don’t have enough labour to fulfil our capacity,” she added.

“Even employees are saying that they feel the pressure of overworking,” Ms Ho said.

Labour issues – relating to shortage of manpower supply, wage demands and subsequent higher costs – are putting pressure on Macau’s casino operators. Firms are competing for new workers and offering better terms to the experienced ones they already have, in preparation for the big Cotai resort openings between 2015 and 2017.

Ms Ho dismissed concerns that bringing in more migrant workers, known locally as ‘blue card holders’, would increase unemployment in Macau. But she admitted any change to current policies should be done in “a harmonious and balanced way that ensures everybody will win” and that Macau’s tourism and gaming industries continue to grow.

The city’s employed population was 392,100 in the three months ended September 30 – gaming directly took on one in five workers. The unemployment rate stood at just 1.7 percent, an all-time low.

There were 162,877 migrant workers in Macau as of September 30, according to data from the city’s Human Resources Office. A total of 13,329 non-residents were listed as working in “recreational, cultural, gaming and other services” as of the same date.

Macau’s Chief Executive, Fernando Chui Sai On, has vowed not to open casino dealer positions to migrant workers. In August, he also called on the city’s casino operators to “facilitate” the provision of housing to their migrant workers to reduce inflationary pressures in the local housing market, which have already priced out a sizeable share of Macau’s resident population.

A report last week from Daiwa Capital Markets suggested “some of the Macau gaming operators are planning to build dormitories in Hengqin to house workers”.

“Reopening” of China relative to its current “Covid-zero” policy could start “in spring 2023” based on “three signposts” that could emerge after the 20th National Congress of the... END_OF_DOCUMENT_TOKEN_TO_BE_REPLACED