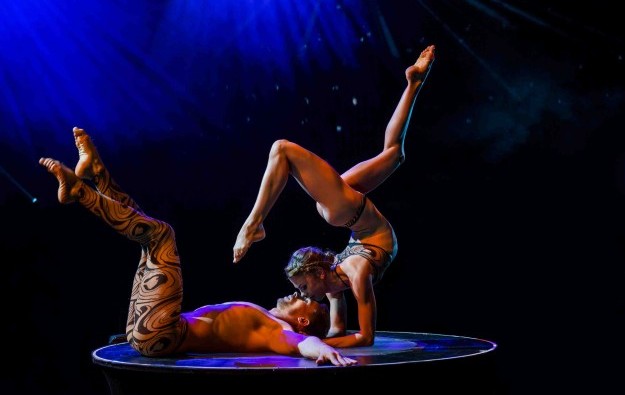 Non-gaming continues to account only for a very small part of the overall revenue of casino operators in Macau, the latest available data show.

The interim results filed by Macau’s six casino operators to the Hong Kong stock exchange show that the weight of non-gaming revenue dropped for most of the companies during the first six months of 2014 compared to the same period one year earlier. Two operators reported year-on-year drops in non-gaming revenue.

Data compiled by GGRAsia show SJM Holdings Ltd is Macau’s most gaming-focused operator. Only 0.75 percent of its overall revenue in the first half of the year, the equivalent to HKD334 million (US$43.1 million), came from sources beyond gaming.

Non-gaming revenue at the firm grew by 3.3 percent in year-on-year terms during the period. Gaming revenue, in comparison, was up by 4.7 percent, according to SJM Holdings’ interim results announcement.

SJM Holdings executives have repeatedly promised to increase the casino operator’s non-gaming footprint with the opening of the HKD30 billion Lisboa Palace, in Cotai. The casino resort, expected to be completed in 2017, will encompass three hotels with a total of approximately 2,000 rooms, facilities for shopping, dining and entertainment, and a casino with up to 700 tables and 1,000 slot machines.

All six Macau concessionaires are building new resorts in Cotai, all featuring large non-gaming amenities. They have an extra incentive to do so, since officials have said casino operators can get additional live gaming table allocations if they build more non-gaming facilities in their new resorts.

Table allocations are a scarce resource in Macau since the government imposed a cap that seeks to limit the growth of live dealer tables to 3 percent compound annual growth until end-2022 from a base of 5,485 tables recorded by the local casino regulator – the Gaming Inspection and Coordination Bureau – at the end of 2012.

Macau’s Chief Executive, Fernando Chui Sai On, has warned gaming operators that providing more non-gaming offerings will be one of the topics on the table during the renewal process of their licences.

Macau’s six casino concessions expire between 2020 and 2022. The Macau government has stated several times that between the years 2015 and 2016 it intends to start examining the renewal of the concessions.

“I do agree that when we review the gaming licences, they [gaming operators] should promise us to invest more in non-gaming elements,” Mr Chui said on Saturday.

Sands China Ltd is unsurprisingly the gaming operator in Macau getting the most revenue out of non-gaming elements. The company operates three large-size shopping malls in its three Cotai properties. It also regularly hosts high-profile entertainment shows at its Cotai Arena at casino resort Venetian Macao.

Sands China’s non-casino revenue was US$503.8 million for the six months ended June 30, up by 20.1 percent in year-on-year terms. Albeit impressive, the rate trailed gaming revenue growth.

Non-gaming revenue at Sands China accounted for 9.9 percent of the firm’s overall revenue in the first half of 2014, down from a share of 10.3 percent one year earlier.

The only casino operator posting an increase in the weight of non-gaming revenue to total revenue for the first half of 2014 was Melco Crown Entertainment Ltd. Non-gaming revenue was US$160.6 million, or 6.1 percent of the total, compared to 5.8 percent one year earlier.

Melco Crown’s flagship property in Cotai, City of Dreams, features two of the most successful resident shows in Macau – ‘The House of Dancing Water’ and ‘Taboo’ (pictured). They helped non-gaming revenue for the operator to grow by 9.9 percent in the first half of 2014, faster than the 4.7 percent growth in gaming revenue recorded by the company for that period – something unique across the industry for the first six months of the year.

Data compiled by Macau’s Statistics and Census Service show non-gaming spending by tourists increased by 13.3 percent in year-on-year terms during the first half of 2014, to an estimated MOP32.2 billion (US$4.0 billion). During the same period, hotel room rates across the city rose by 12.0 percent, with occupancy rates up by almost 4 percentage points, to 90.4 percent, according to the Macau Hotel Association.

Casino gross gaming revenue in Macau rose by 12.6 percent in the first half of 2014 from one year earlier, to MOP193.1 billion, data from the city’s gaming regulator show. Monthly gaming revenue growth has been slowing down since the end of February, having entered negative territory from June onwards.

Table: Macau casino operators by revenue segments during the first half of 2014 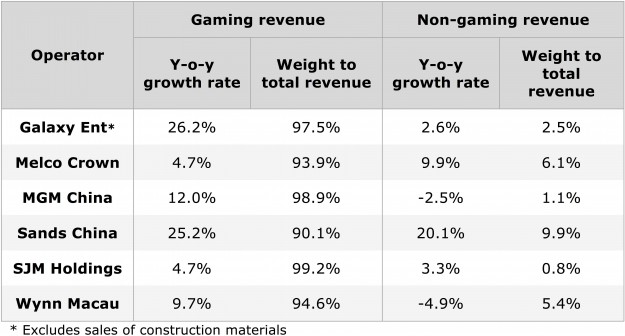 Starting from Friday (July 8), two more hotels at major Macau casino resorts will be used for Covid-19 quarantine purposes. It will double the number of large gaming-resort hotels on Cotai that are... END_OF_DOCUMENT_TOKEN_TO_BE_REPLACED