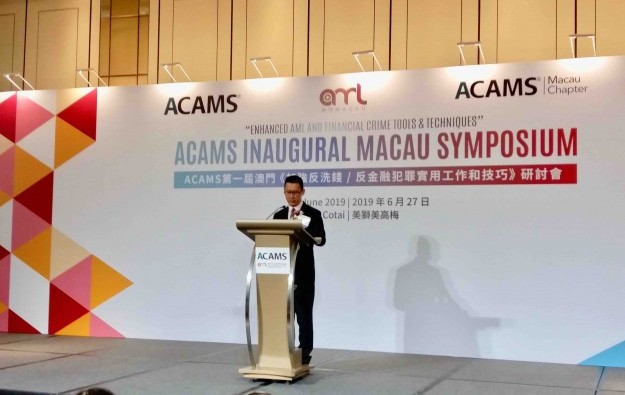 Macau has “not been taking a relaxed attitude” towards the issues of anti-money laundering (AML) and combatting the financing of terrorism, said the head of the city’s casino regulator at a major conference on those topics, held in Macau on Thursday.

The regulator, the Gaming Inspection and Coordination Bureau, also known as DICJ, had instead been “refining its supervision of the industry,” said Paulo Martins Chan (pictured), the body’s director.

He was speaking in Cantonese – with simultaneous translation – at the start of the ACAMS Inaugural Macau Symposium, an event for professionals in the field of supervision or with an interest in the topic. “ACAMS” is the branding for the Association of Certified Anti-Money Laundering Specialists LLC.

Mr Chan added some remarks delivered in English to the several hundred delegates present at the event at the MGM Cotai casino resort.

He said that despite having had some experience of handling money laundering cases, he had faced a lot of work to learn more about the field once he was at the gaming bureau. Mr Chan worked for 17 years in public prosecutions in Macau prior to his current job which he took up three years ago.

He asserted that the “very favourable results” of the mutual evaluation of Macau’s AML effort – conducted by the city’s government and the Asia/Pacific Group on Money Laundering (APG) – had been the product of the “effort of the members of the Macau government as well as our gaming sector and the other people that had contributed”.

The result of the evaluation – conducted in late 2016 and including visits to the city by APG officials – was announced in mid-2017.

It had said “sound, risk-based supervision” was being undertaken in Macau’s gaming sector, but that there was also a need for better understanding among the Macau VIP gambling promoters – third parties licensed by the Macau government – of the city’s updated local rules on money laundering and on terrorism financing risk.

Connie Chu Un I, director of Macau’s Financial Intelligence Office, which has the responsibility for identifying potential non-AML compliant transactions in the casino sector and the rest of the city’s finance sectors, also spoke at the opening of the event.

She said that according to the APG mutual evaluation results, Macau met six out of 11 “effectiveness ratings”, which meant the jurisdiction was ranked among the “higher tier” of the APG members.

In the “compliance assessment” which deals with the legal and institutional framework of a jurisdiction, Macau had 37 “compliant” or “largely compliant” ratings out of the 40 recommendations as defined by the APG.

She told delegates at Thursday’s event: “There were still some gaps identified in terms of the absence of a declaration or disclosure system of the transportation of cash and BMIs [banking and monetary instruments] as well as some gaps in the regulatory framework of DNFBPs [designated non-financial businesses and professions].”

This had led to one finding of “non-compliance” regarding one particular APG recommendation, and of the city being “partly compliant” on another.

With effect from November 2017 – shortly after the findings of the APG mutual evaluation – Macau introduced a system whereby visitors entering Macau and carrying MOP120,000 (US$15,000) or more in cash – or the equivalent in other currencies – are obliged to report the fact to the local authorities.

Hue Dang, head of Asia for ACAMS also spoke at the opening of Thursday’s event. She said that money laundering was in no sense a private crime, but one that had an impact on society.

She stated that one estimate from the United Nations Office on Drugs and Crime suggested US$2.1 trillion – or about 3.6 percent of global GDP – was lost annually to money laundering.

This was “very consistent” with a number that was first published by the International Monetary Fund in 1998, said Ms Hue.

“For every US$1 billion of laundered funds in any economy, it translates to 0.03 percent to 0.06 percent decline in economic growth. You might say… that’s not a big number,” she stated.

But Ms Hue added: “If you were to use the U.S. GDP data of 2017, that means a US$6 billion to US$12 billion loss in economic activities… I would say that’s a pretty meaningful economic impact.”

International casino operator Las Vegas Sands Corp has been ranked as the most sustainable firm in the global casino sector, according to the 2023 edition of the S&P Global Sustainability... END_OF_DOCUMENT_TOKEN_TO_BE_REPLACED