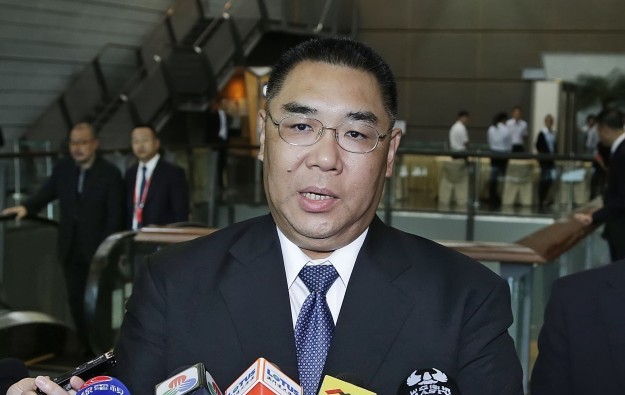 The Macau government is currently not seeking an increase in visitor arrivals from mainland China nor “actively requesting” the expansion of the Individual Visit Scheme (IVS) policy, said on Tuesday the city’s Chief Executive, Fernando Chui Sai On (pictured).

Mr Chui made the comments to local reporters when asked about the recent discussions with mainland China officials. On March 15, China’s State Council stated that it would assess how to “optimise and adjust” the IVS policy for mainland visitors travelling to Hong Kong and Macau, as part of Beijing’s support to the regional economy of the Pearl River Delta.

Commenting on the talks over the IVS policy with mainland officials, Mr Chui said: “We will ensure that the quality of life of local residents will not be hugely influenced; and secondly, we also hope that we can satisfy the demands from the Chinese tourists that have chosen Macau as their travel destination.”

He added: “We are not actively requesting an increase in the number of visitors [from mainland China] or to add more mainland cities [to the IVS policy].”

Mr Chui additionally said that both the Macau government and the Chinese authorities are aware of the potential negative impact that a sudden increase in the number of visitors could have to Macau. The city recorded about 30.7 million visitor arrivals last year, an annual decline of 2.6 percent, according to official data.

GGRAsia asked the Office of the Secretary for Social Affairs and Culture for more details regarding the possible optimisation of the IVS policy but did not receive a reply by the time the story went online.

On Tuesday, Mr Chui did not provide details on how the IVS policy could be optimised, but noted that the Macau government has reviewed the impact of the visit scheme and would continue to assess the impact of the scheme with mainland China authorities.

The government will keep analysing the optimum tourist carrying capacity of the city on an annual basis, said Mr Chui, adding that the latest tourist capacity report compiled by the Institute for Tourism Studies (IFT) would be sent to the China National Tourism Administration.

The optimum tourist carrying capacity of Macau stood between 32.6 million and 33.7 million visitors in 2014, or 89,374 and 92,325 tourists a day, according to IFT’s report published in March last year.

Macau plans to allow in future junket operators and their collaborators to deposit cash or gaming chips on behalf of their patrons, provided such processing is only via customer accounts established... END_OF_DOCUMENT_TOKEN_TO_BE_REPLACED