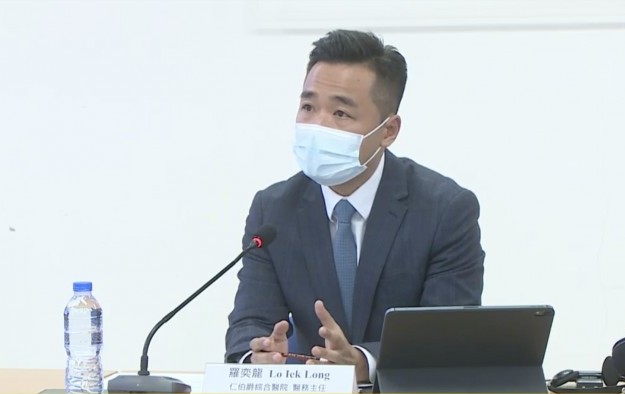 Macau’s “only choice” in tackling the threat of Covid-19 is to continue following China’s zero-tolerance approach, said on Wednesday Alvis Lo Iek Long (pictured in a file photo), director of Macau’s Health Bureau.

His comments came after the director-general of the World Health Organization (WHO) – the body that has coordinated the global response to the pandemic – queried on Tuesday whether China’s zero-tolerance approach was “sustainable considering the behaviour of the virus”. That was understood to be a reference to the novel coronavirus’ ability to mutate, leading to the emergence of variations able to spread very rapidly.

An investment analyst said in a memo on Macau casino operator Wynn Macau Ltd’s first-quarter results – which saw negative earnings before interest, taxation, depreciation and amortisation – that he expected trading conditions for the local gaming sector to continue being difficult “unless China relaxes its zero-Covid policy”.

Macau health official Mr Lo’s defence of the national policy came in comments to local journalists when he attended a studio session of a talk show. It was hosted by the Chinese-language radio service of the city’s public broadcaster, TDM.

He was asked by journalists about some remarks from WHO boss, Tedros Adhanom Ghebreyesus, reported on Tuesday. The WHO official suggested that the scientific knowledge gained since the start of the pandemic and the tools acquired to tackle to virus – including vaccines – offered opportunities for broadening public policy to tackle the threat.

It is known as “dynamic zero”, and involves containment – via tools including mass-testing of populations – and eradication.

This was “definitely Macau’s only choice”, said local official Mr Lo in his Wednesday remarks.

“Looking at the [Covid-19] outbreaks in some neighbouring places and their death tolls – which is undesirable – we have to ask: ‘can we accept deaths from the pandemic?’”, the health director stated.

He added: “We’ve followed the dynamic zero approach for more than two years, and by this approach we have not only protected the safety of our citizens: their lives have also been normal through most of that time. We do not see any urgency in shifting into another policy,” to tackle Covid-19.

A number of jurisdictions in the Asia Pacific region has moved to a ‘living with Covid’ strategy, after achieving a high vaccination rate against the disease among their populations.

In Macau, the current Covid-19 vaccination rate amongst the local residents was “88.4 percent”: the elderly and those with chronic disease, still had relatively low vaccination coverage, said Mr Lo in Wednesday’s talk show.

He did not clarify if the 88.4 percent figure referred to those who had received at least one jab. Macau is currently advising people to have a total of three vaccination shots, in order to be evaluated as protected.

During the programme, Mr Lo told the audience there was “no room” for Macau to ease the current zero-tolerance policy.

The health bureau head added during the show: “If we… adopt other policy goals, that will result in mass [Covid-19] infections. Then, how are we to sustain the normal travel ties with mainland China?”

To date, mainland China is the only place that has a largely quarantine-free travel arrangement with Macau.

South Korea on Thursday said it would from June 1 resume issuing short-term tourism visas for trips to the country’s mainland, for individual visitors and groups of tourists. Permits for... END_OF_DOCUMENT_TOKEN_TO_BE_REPLACED