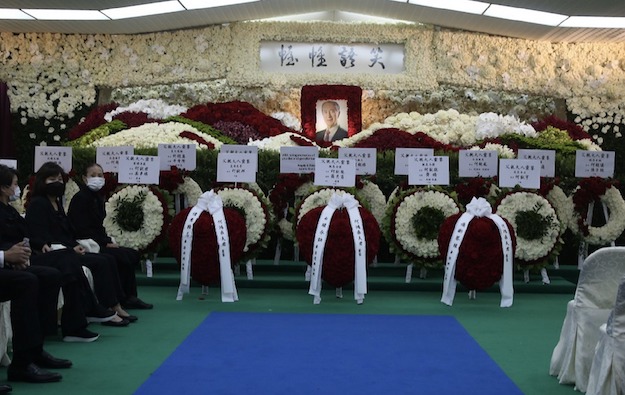 Funeral rituals (pictured) for the entrepreneur, who died aged 98, on May 26 at Hong Kong Sanatorium and Hospital, are being held over the course of three days, and started on Wednesday.

Mr Stanley Ho’s Macau monopoly, begun under Sociedade de Turismo e Diversões de Macao SA – also known as STDM – ran from 1962 until 2002. Another firm he founded, SJM Holdings Ltd, is one of three current Macau casino operators that are led by offspring of his.

Others in that procession are: a Hong Kong banker, David Li Kwok-po; a Hong Kong property tycoon, Gordon Wu Ying-sheung; and a Hong Kong Stock Exchange former chairman, Charles Lee Yeh-kwong, according to a statement issued on behalf of the funeral organisers.

One of Mr Stanley Ho’s daughters, Pansy Ho Chiu King, managing director of Macau operator, MGM China Holdings Ltd, will bear a message of condolence from top Chinese officials. One of the late businessman’s sons, Lawrence Ho Yau Lung, chairman and chief executive of another Macau licensee, Melco Resorts and Entertainment Ltd, will, on behalf of the family, thank mourners.

A public memorial service for Mr Ho held on Thursday was attended by a number of renowned business people, including SJM Holdings’ Mr So, and members of the Lui family that controls one of SJM Holdings’ rivalsl in the Macau casino market: Galaxy Entertainment Group Ltd. Allan Zeman and Linda Chen, respectively chairman and vice chairman of another Macau operator, Wynn Macau Ltd, sent flowers.

In addition, several departments of the Chinese central government; as well as the Hong Kong and Macau governments, issued eulogies for Mr Ho.