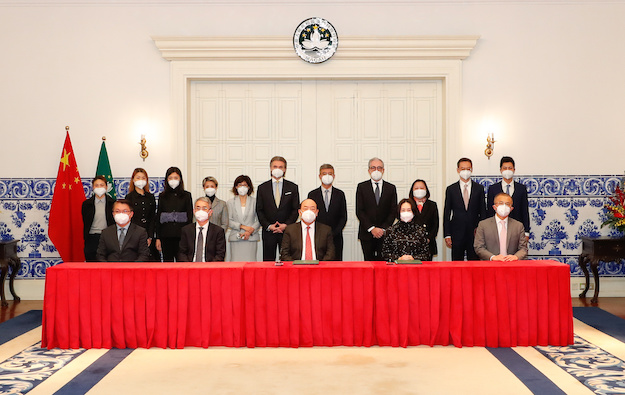 Macau’s six freshly-reinstalled gaming concessionaires have pledged to the city’s government they will invest MOP118.8 billion (US$14.8 billion) between them over the course of their new 10-year permits.

They have agreed to commit 10 times as much to “exploring overseas customer markets and developing non-gaming projects”, i.e., MOP108.7 billion, compared to gaming investment, where the aggregate will be MOP10.1 billion over the decade of the new concessions, which begin on January 1 next year.

According to the new concession contracts, published on Macau’s Official Gazette on Friday evening, the MGM group has pledged to invest a total of MOP16.70 billion over the course of the next 10 years, including gaming and non-gaming investment. The Galaxy group will invest a total of MOP28.35 billion; the Sands group has pledged to invest MOP30.24 billion; while the Melco side is to invest MOP11.82 billion.

The Wynn group has pledged to invest MOP17.73 billion, while the SJM side has proposed a total investment of MOP14.03 billion.

The non-gaming investment will cover 10 fields, including entertainment and performances, sports events, convention and exhibition business, culture and art, healthcare, and “themed amusement”.

The operators will also be expected to meet corporate social responsibilities regarding protection of local employment and promotion of upward mobility of local workers.

A body called the Macau Gaming Committee will monitor the operators’ performance and compliance with their pledges, on behalf of the government.

A second government press release, issued following the signing ceremony at the government headquarters, said the city’s Chief Executive, Ho Iat Seng, held a meeting with representatives linked to the new concessionaires, and congratulated them.

He also thanked them for their efforts in response to the new public tender process for gaming concessions, and for supporting the government’s requirements in relation to ensuring local employment, exploring overseas customer markets, and developing non-gaming projects.

In separate remarks during a follow up press conference, the head of the committee for the gaming concessions public tender, the Secretary for Administration and Justice André Cheong Weng Chon, stated: “Each of the operators has to deliver by the end of September every year their planned investment and implementation plan for non-gaming for the next [calendar] year, for the government to follow up and make any relevant approvals.”

Mr Cheong also said the Macau government would want the non-gaming commitments made by the concessionaires to be a driver of the city’s “tourism and economy”, and to provide benefit also to local small- and medium-sized businesses.

“What we hope is that the development of non-gaming projects can… consolidate Macau’s position as a world centre of tourism and leisure, and also support our gaming industry to be healthy.”

In this manner, “non-gaming and gaming” would “not be in conflict with each other,” he added.

International casino operator Las Vegas Sands Corp has been ranked as the most sustainable firm in the global casino sector, according to the 2023 edition of the S&P Global Sustainability... END_OF_DOCUMENT_TOKEN_TO_BE_REPLACED