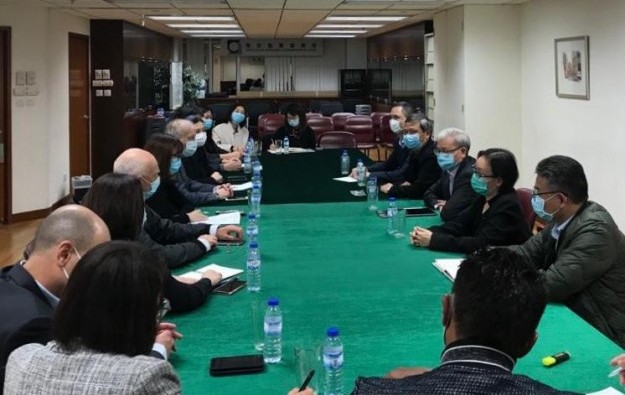 The Macau government has asked the city’s six casino operators to provide temporary accommodation in the city to its non-resident workers that reside outside of Macau. The measure aims to prevent the spread of a newly-identified coronavirus, said the government in a Sunday written announcement.

Representatives of Macau’s Gaming Inspection and Coordination Bureau and of the Labour Affairs Bureau had a meeting (pictured) with executives from the six casino operators to discuss fresh measures on the ongoing fight against the local incidence of the novel coronavirus.

In Sunday’s press release, the two government departments said the city’s casino operators had shown support to the latest initiative, pledging to provide accommodation in “adequate conditions” to their respective non-resident workers. The move aimed to lower the risk of “cross-contamination” of the viral pneumonia, namely by reducing the number of people crossing the border between Macau and the neighbouring city of Zhuhai, where most of these non-resident workers that live outside of Macau reside.

According to the release, non-resident workers that are considered “essential” for the company’s operations should be provided a temporary residence within the city; those that perform “non-essential tasks” are advised to remain in Zhuhai and should only return to Macau once the coronavirus outbreak is “under control”.

GGRAsia has asked the city’s six casino operators for details regarding their respective accommodation arrangements for their non-resident workers that live outside Macau, but did not receive a reply by the time the story went online.

Macau confirmed on Sunday a new case of novel coronavirus infection, taking to eight the tally of such cases recorded in the city. The new case is the first involving a local resident but the infection has been classified as an imported case as the authorities suspect the woman had been infected while travelling in mainland China, according to a government press release.

The health authorities in Zhuhai announced on Sunday an aggregate of 51 infection cases of the novel coronavirus.

Currently, an average of 35,000 non-resident employees that work in Macau commute daily between the city and Zhuhai, according to data from the Public Security Police included in Sunday’s press statement. Approximately “80 percent” of these employees make their daily commute via the Border Gate checkpoint, showed the police data.