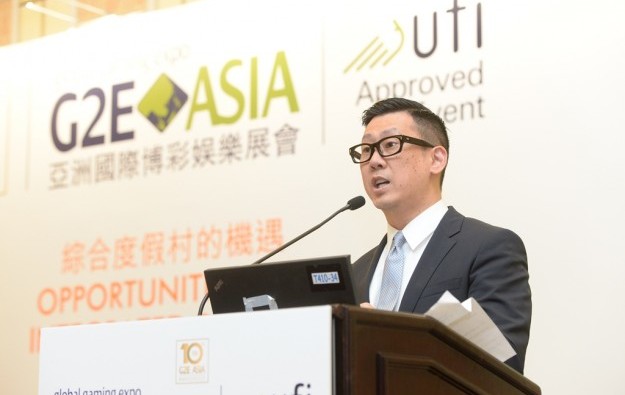 Macau’s six casino operators should not fear the process regarding possible refreshment of their respective gaming licences, the head of the city’s casino regulator told GGRAsia.

“I am not a fortune teller [laughs]. But I don’t foresee any special reason for them to be fearful [about their future in Macau],” said Paulo Martins Chan (pictured), the director of the city’s Gaming Inspection and Coordination Bureau.

He added: “[The licence renewal process] will be prepared as a way to further Macau’s development as a world centre of tourism and leisure.”

The current casino licences expire on various dates between 2020 and 2022. “We are not in a position to say when we will start the [renewal process],” Mr Chan said on Wednesday.

He additionally told GGRAsia that there was no schedule for the introduction of an industry wide database listing people that owe overdue debts to junket operators related to credit issued for gambling. The database has been requested by the junket industry as a way better to control bad debt in the sector.

“It is hard to estimate [when such a database could be introduced],” Mr Chan said.

He added: “We first need to achieve a consensus [with the industry]; then we need to meet with the Personal Data Protection Office [to discuss the matter]; after that, comes the law drafting stage. Therefore, I think it will take some time.”

One of the main issues regarding the establishment of an industry wide VIP client bad debt database is compliance with Macau’s personal data protection rules. According to some junket operators, a way to ensure compliance would be to request high rollers to sign an authorisation form allowing disclosure of their credit details when these players apply for credit.

“This would be an essential requisite to overcome data privacy-related issues,” Mr Chan told GGRAsia. He added that this kind of authorisation was common practice in other industries when applying for a loan, such as in the banking industry.

Later on Wednesday, in comments to reporters, Mr Chan added that the casino regulator and the junket industry were also discussing the possibility of barring players with gaming-related bad debts from entering any casino in Macau. He said that would be “the next step” to consider once an industry wide database on bad debt was established.

“Macau is ruled by the principle ‘one country, two systems’,” he said, in a reference to the city’s administrative and legal autonomy from mainland China. “We cannot interfere in [mainland] China’s affairs.”

He added: “In this regard, I think there was never any approach. What we can do is – within our jurisdiction and within our powers – help junkets get back the credit lent.”

The head of the Macau gaming regulator said that there was still no agreement between the firm and all of those claiming to be investors in the cage operations of Dore with funds lost due to the fraud case.

“I think the best way to solve the issue is through legal action,” Mr Chan stated.

Ban on proxy not hurting business

He additionally provided some commentary on the implementation of a de facto ban on proxy betting in Macau. The ban was introduced last week, via forbidding the use of telephones at VIP gaming tables.

Mr Chan said there had been some cases of people not complying with the new policy, but he stated the number of violations was under control. He added that the feedback the gaming regulator was getting from casino operators and junkets showed the ban was not having a big impact on business.

The head of the casino regulator also confirmed that – for the time being – there were no penalties for players caught using their phone at a VIP gaming table. He stated that, if needed, operators could however ban the player from the gaming room.

Daiwa said in a separate report that the decision to forbid the use of telephones at gaming tables in Macau would likely hit the smaller junkets, with a few of them already “planning to cut their operational presence in Macau”.

The head of Macau’s gaming regulator also said the bureau had not received any request for a casino at The 13 hotel. He added that if an application were filed, approval would “depend on the particulars of the request”.

Project developer The 13 Holdings Ltd – previously known as Louis XIII Holdings Ltd – has in the past mentioned plans for a casino at the property. But the company has made no mention in its more recent releases of gaming facilities at the venue. The firm would need to utilise the casino rights of one of Macau’s six gaming concession holders in order to operate gambling at the property. It has not publicly named a gaming partner so far.

Mr Chan’s remarks were made on the sidelines of Global Gaming Expo (G2E) Asia 2016. The three-day trade show and conference – focused on the Asian gaming industry – runs until Thursday at the Venetian Macao.

Mr Chan was one of Wednesday’s speakers at the conference segment of G2E Asia. In a speech on the topic of ‘Transformation in changing conditions”, he highlighted the need for Macau to “expedite economic diversification” by “actively promoting” the introduction of more non-gaming elements in the city’s casino resorts.

In his remarks, Mr Chan mentioned the need to “continue further strengthening” Macau’s gaming laws and regulations. He stressed that the government’s goal was “to improve the overall quality rather than quantity of the gaming industry”.

Mr Chan noted that the industry’s ability to show “strong legal compliance” and integrity were important elements for gamblers to see Macau as a “safe and comfortable place, where they can come to enjoy, have fun and relax”.

An article in Macau’s draft new gaming law, to create a mechanism to dissolve an existing gaming concession in the event it was not granted a new licence after the current six concessions... END_OF_DOCUMENT_TOKEN_TO_BE_REPLACED