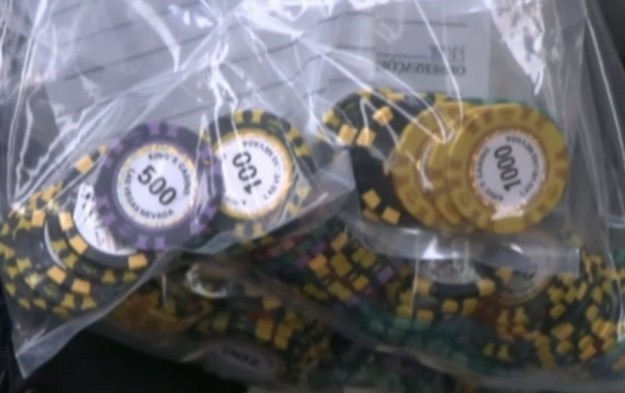 The Tuesday night raid occurred in Macau’s Areia Preta district, a residential neighbourhood with no legal gambling facilities. The casino was in an apartment at a high-end residential building.

A poker table, 16 computers and gaming chips (pictured, source: TDM) with a total face value of MOP3 million (US$373,867) were seized in the operation, police spokesman Lei Tak Fai told reporters during a press conference on Wednesday.

“There were nine people who were playing poker. One of them was dealing and the other eight were gambling,” he said, quoted by public broadcaster TDM.

Mr Lei added: “We believe that the man in charge of the operation was also there. The remaining five people were gambling online.”

Police investigations show the alleged illegal casino had been running for more than one month. The police raid followed a tip-off, Mr Lei said.

The suspected leader of the operation – a 26-year-old local waiter – could face charges of operating an illegal gambling establishment and Internet casino. The gamblers might be prosecuted on illegal gambling charges and would face fines if convicted.

Macau recorded a total of 1,553 cases of suspected gaming-related crime in the year 2015, according to police data disclosed last week. The figure represented a jump of 38 percent compared to the 1,125 such cases recorded in 2014. Police officials have admitted that the recent increase in the number of reported crimes is likely to be related to the ongoing revenue decline in the city’s casino industry.

Last month, five serving police officers were arrested in Macau for alleged involvement in a racket that allowed people from mainland China to enter the city illegally to gamble. One retired officer was also arrested.

International casino operator Las Vegas Sands Corp has been ranked as the most sustainable firm in the global casino sector, according to the 2023 edition of the S&P Global Sustainability... END_OF_DOCUMENT_TOKEN_TO_BE_REPLACED