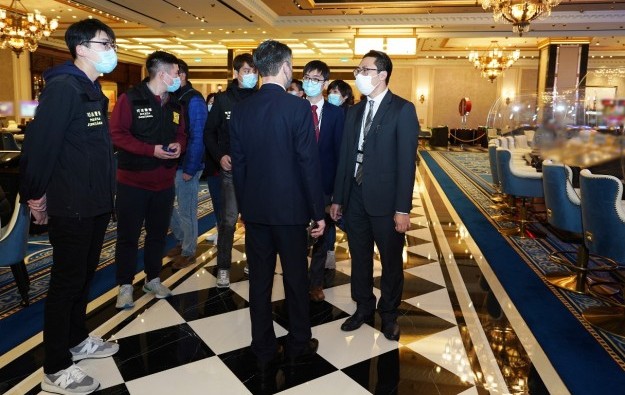 Officers from Macau’s Judiciary Police joined staff from the city’s casino regulator, in making unannounced visits (example pictured) to house-managed VIP gaming “rooms” of several Macau casinos on Wednesday and Thursday (February 16 and 17), according to a Friday press release from the police.

No “illicit activities” were observed in terms of the management of the casinos visited, added the statement. But six people suspected of acting as third-party money changers were detected.

The action by the police and the Gaming Inspection and Coordination Bureau, at venues on Macau peninsula and on Cotai, was motivated in part, by a desire to “strengthen efforts” against illicit money-changing, said the police. The release did not name the venues visited.

The police said that a total of 117 people was checked during the joint operation. Two individuals were found to be visa overstayers. Six others were money-change suspects.

The checks occur at a time that collaboration between Macau casino operators and government-licensed VIP gaming promoters – also known as junkets – has effectively been suspended, according to various statements by the city’s casino operators. That has coincided with casinos freshly taking on high-roller players as directly-managed customers, according to some investment analysts, citing management commentary.

Macau recorded 1,372 “gaming-related” crimes during 2021, up 23.2 percent year-on-year, the Judiciary Police announced in late January. In  commentary published with those statistics, the police said that illicit money-exchange activities had continued to “negatively impact casinos and security in their surroundings”.

Macau recorded 965 “gaming-related” crimes in full-year 2022, down 29.7 percent on the 1,372 identified in the previous year, according to the latest statistics published on Tuesday by... END_OF_DOCUMENT_TOKEN_TO_BE_REPLACED